Ral is a long-time fan of Gundam and Gunpla. He is very knowledgeable about Gunpla Battle and well-connected among the people involved in it. Although much about his character is unexplained, Ral appears similar to the anime character Ramba Ral, and some characters in the show even refer to him using Ramba Ral's rank of "Lieutenant" or his title, "Blue Giant".

As Sei and Reiji progress through the Gunpla Battle World Championship, Ral supports them in a number of ways; he helps Reiji to find opponents to help improve his battle skills, he offers insight into the intricacies of the Gunpla Battle world, and occasionally uses his influence as a long-time Gunpla builder to help them along.

As a pilot Mr. Ral is extremely proficient, as shown in GBF Ep. 25, he alongside Master Chinan were able to defeat a lot of Mocks with ease, using their signature move. Even formidable players respect his strength as the "Blue Giant".

Ral is introduced as a regular customer of Iori Models. After Sei Iori finishes his Build Strike Gundam for the competition, Susumu Sazaki enters the shop and taunts him, saying that Sei lacks the skill to control the model in battle, and the two agree to a battle to decide who will operate Build Strike. Mr. Ral overhears their conversation and announces that he will judge the battle.

Later, Ral demonstrates his abilities as a modeler and battler when he brings two of his models to Iori Models: First a Best Mecha Collection Gouf, with which he challenges Reiji. Despite the limited range of motion of the early 1980s kit he is briefly able to anticipate and avoid Reiji's attacks. Later, he shows his High Grade Gouf. Sei is impressed with its craftsmanship, but when Reiji asks Ral to battle with it, Ral declines, explaining that the model is strictly a display piece built to cherish and replicate the anime world.

When Reiji seeks to improve his skills as a fighter, Ral takes him to a Battle Bar, where several adult Gunpla fans wearing Zeon uniforms are Gunpla Battling. Ral appears to be well known by the patrons of the bar, who address him as Lieutenant. Ral introduces Reiji to the adults, and asks them to Gunpla Battle against Reiji.

After Sei and Reiji win the regional championship, Ral accompanies them on the resort trip they win as a prize. When the resort is subjected to extortion by Tatsuzo, Ral confronts the criminal, and ultimately uses his influence to bind Tatsuzo to an agreement which saves the resort.

Later, Ral travels to Finland to watch Carlos Kaiser's final regional championship battle. However, he arrives late and learns that Kaiser was defeated by Aila Jyrkiäinen in a brief battle. Ral brings news of Kaiser's defeat back to Sei and Reiji in Japan.

During the 7th Gunpla Battle World Championship, Ral discovers that C is interfering with the championship and targeting Sei and Reiji. Ral confronts C and succeeds in stopping him, but C escapes. Ral then informs Sei and Reiji that they have been targeted by the Gunpla Mafia, and that the Mega Size Zaku which attacked them in an earlier round may have been sent out by Chairman Mashita.

Much later, he and Master Chinan participated in the attack on space fortress A Baoa Qu. Working together the two veterans, would manage to destroy a large number of Mocks, causing the other gunpla fighters to be in awe of their strength.

In Gundam Build Fighters Try, he is the coach for the Gunpla Battle Club, although he is not a member of the school's staff. Mr. Ral would act as an adviser and trainer for team Try Fighters. 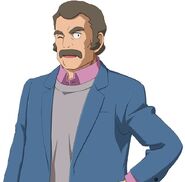 Chinan and Ral using "It"

Retrieved from "https://gundam.fandom.com/wiki/Mr._Ral?oldid=462434"
Community content is available under CC-BY-SA unless otherwise noted.