The Mother Vanguard is a ship that appears in the Mobile Suit Crossbone Gundam manga. It serves as the flagship of the Crossbone Vanguard space pirates.

Beauty of exterior design was emphasized in the Mother Vanguard as it was built with the noble principles of Cosmo aristocratism. The design also emphasizes elegance, and its appearance with a mast is reminiscent of a sailing ship. A golden goddess statue is engraved on the bow, and a beam flag can be deployed from behind the mast. However, it is not just specialized in design, but the internal mechanism is luxuriously incorporated with the latest technology of the time, and it boasts high performance as a space battleship. Among them, the Minovsky Drive is the latest technology at the time of construction, and although it is the size of a spaceship class, it is capable of long-distance navigation comparable to interplanetary navigation vessels. The Minovsky Drive is a top secret technology that is not installed in other ships of the same type, so the Mother Vanguard is usually propelled by a thermonuclear rocket engine like a conventional ship to hide its existence.

A beam shield that covers almost the entire ship can be deployed. Continuous deployment is limited to about 20 minutes when the engine reaches criticality.

Developed from the Minovsky Craft System, the Minovsky Drive System is a new form of propulsion technology that allows an equipped machine to accelerate to extremely high speeds both in space and in the Earth's atmosphere. The speed that can be achieved is so great that an equipped mobile suit can travel from the 600 million kilometers separating the Earth Sphere from the Jupiter Sphere in about 150 hours while ships designed to make such a journey would require a minimum of three months when the two planets are at their closest position to one another. One of the primary advantages of the Minovsky Drive System is that it does not require burning conventional fuel to operate and instead relies solely on the Minovsky particles produced by the Minovsky fusion reactor. Because the reactor continually produces Minovsky particles the Minovsky Drive System theoretically has no operating limit as long as all components are working properly.
The Minovsky Drive System was first developed by the Buch Concern and installed it aboard the ship Mother Vanguard as the "Sail of Light." In the year U.C. 0136 both SNRI and Anaheim Electronics were both developing Minovsky Drive technology for mobile suits nicknamed "Wings of Light", though SNRI developed the technology on their own while Anaheim developed it by studying the remains of the Mother Vanguard. Because of the events of U.C. 0136 all prototypes and data were lost and it would not be until 17 years later when the technology would be available again.

Originally known as the Babylonian Vanguard, the ship was constructed by the Crossbone Vanguard as a flagship for their invasion of Earth. However, by the time of its completion in U.C. 128, the Cosmo Babylon Founding War had ended.

After its completion, the ship went on its maiden voyage with both Seabook Arno and Berah Ronah on board. However, the ship was destroyed in an explosion, supposedly caused by an accident, though terrorist attack was also suspected. The ship's entire crew was presumed dead.

In truth, the ship survived the explosion and became the mothership of the new Crossbone Vanguard under the command of Berah Ronah. Now renamed Mother Vanguard, the ship was responsible for mounting a series of attacks on the Jupiter Empire's operations. 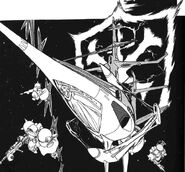 Mother Vanguard as it appears in Mobile Suit Crossbone Gundam

Sprite of the Mother Vanguard as it appears in Super Robot Wars α2. 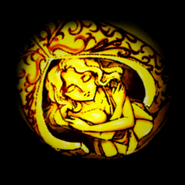 The figurehead of the Mother Vanguard as seen in Super Robot Wars α2.

The Mother Vanguard with its beam shield up.