Morgan Chevalier is an ace mobile suit pilot for the Earth Alliance's Eurasian Federation, like fellow ace pilot Edward Harrelson, underwater ace Jane Houston, and MS instructor-turned ace Rena Imelia. His rank is Lieutenant.[1] Known as the "Moonlight Mad Dog", he was originally a member of the Eurasian Federation tank corps. The "moonlight" part of his nickname comes from the fact that he excels at nighttime operations, and the "mad dog" comes from the fact that his maneuvers, which were so far ahead of their time, seemed reckless at first glance. He also had an accurate grasp of the positions of many of his men and the enemy forces, which was later regarded as an example of his special spatial awareness, and in fact his operations led his troops to victory many times.

On May 30, C.E. 70, at El Alamein on the African front, he hunted down a squadron of TFA-2 ZuOOTs belonging to Martin DaCosta, but was badly defeated by a squadron of TMF/A-802 BuCUEs led by the "Desert Tiger" Andrew Waltfeld. Foreseeing that MS will play a leading role in the upcoming battles, he made a proposal to the Eurasian army, but was rejected. After repeated advocacy, he was finally assigned as a training exchange officer to the Atlantic Federation, which had begun researching MS. Here, he used the skills he had developed in the tank unit to systematize the basic techniques of MS operation, laying the foundation for the Earth Federation's research into tactics and warfare techniques for MS operation. As a MS pilot trainer, Edward Harrelson, aka Ed the Ripper, is one of his students, and he has a certain amount of admiration for him. Eventually, he was assigned a GAT-01A1 Dagger, and it was later discovered that he could control remote weaponry called gunbarrels, and received the AQM/E-X04 Gunbarrel Striker that was originally meant for the now defected Mu La Flaga.

During one of the engagements in the Second Battle of Jachin Due, Morgan used his GAT-01A1+AQM/E-X04 Gunbarrel Dagger to lead a squad of seven other Daggers (equipped with the Aile, Sword, and Launcher Striker packs) against a ZGMF-1017M GINN High Maneuver Type squad led by Mikhail Coast. The fight with Mikhail was interrupted by the first firing of the GENESIS, and although Morgan was not caught in the beam, his Gunbarrel Dagger lost three of its gunbarrel pods and all his teammates were killed. Morgan later fought a YFX-600R GuAIZ Experimental Firearms Type, but this fight was interrupted by the second firing of GENESIS. However prior to this, he had shot off the GuAIZ's right leg and destroyed its beam rifle, while the GuAIZ's pilot on the other hand was able to destroy two gunbarrel pods and the left arm of Morgan's Gunbarrel Dagger.

He was one of the aces sent to take down Edward Harrelson, who had gone AWOL from the Alliance with the GAT-X133 Sword Calamity and some other MS and was wanted for treason. Morgan leaked out false information about a missile attack on the contingent of South America to lure Edward into space so he could stop the attack. In space, Morgan was able to pin down Edward's Raider Full Spec using the gunbarrel pods, but Edward managed to escape by riding debris to Earth similar to the way Lowe and his friends did.

Morgan appears later, piloting a blue TS-MA4F Exus when he joins up with Riika Sheder in escorting a passenger shuttle carrying Edward Harrelson and Bernadette Leroux in a prisoner exchange between ZAFT and the Earth Alliance, when they are suddenly attacked by the ZGMF-YX21R Proto-Saviour, piloted by Ile De Llorar. They are then forced to join forces to defend themselves from the Proto-Saviour. However they are assisted in the battle by the timely arrival of Jean Carry.

In the Gundam Wars card game, due to a more user friendly setting, he is listed as a Newtype instead of a different ability of spatial awareness. However, this is not the official story settings. He also appears as an enemy in Super Robot Wars W, and is also briefly playable in one mission. His Gunbarrel Dagger can be purchased in a New Game Plus and can be piloted by either Prayer Reverie or Mu La Flaga due to their high spatial awareness. 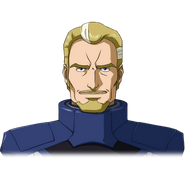