An officer from the office of Supreme Commander, Monique Cadillac was assigned to the Jotunheim as the 603 Technical Evaluation Unit's political officer. She immediately showed disdain towards the ship, mockingly calling it a "pencil case". She is also short-tempered and easily offended. Being a member of the office of Supreme Commander, she was the only member of the ship who knew about Operation British beforehand, justifying it by saying that surprise attack is a tried-and-true strategy.

The Howl that Dyed the Setting Sun

Monique expressed strong disdain towards Demeziere Sonnen, whom she knew during his days as a tank instructor, disappointed at his self-degradation after he failed to become a mobile suit pilot.

During the drop to the 67th Supply Depot in Arizona, Monique Cadillac pilots a Komusai with Oliver May transporting the YMT-05 Hildolfr along with Sonnen. The Komusai was attacked by captured Zakus being used by Federation forces. In order to keep the Komusai from crashing, Sonnen gets Oliver May to drop the Hildolfr from the enemy so that he may engage them.

After Sonnen was killed in battle, Monique, despite her harsh words toward Sonnen earlier, still expressed sadness at his death.

The Jotunheim responds to the distress call of orbit-drowning Zeon forces retreating from Odessa, Monique sorties in the EMS-10 Zudah to engage the incoming Federation forces along with Jean Luc Duvall and Hideto Washiya. Duvall and Washiya take on the Balls while Monique helps a ground Zaku reach safety. At the same time a squad of GMs open fire on the Jotunheim. Duvall then flies around them and leads them away from the H.L.V.s. Oliver tells Monique to bring back Duvall and keep an eye on her engine, but she tells him she doesn't have time for that. Duvall pushes his engine to the limit, forcing the GMs to push themselves to the limit to keep up. One of the GMs falls back due to engine problems, but Monique destroys it. Monique reaches her engine limit and shuts it down. The three remaining GMs overload and explode. Soon after, Duvall's Zudah breaks apart and explodes in the atmosphere.

Go Beyond the Peak of the Beams of Light

Upon arriving at A Baoa Qu, Jotunheim is visited by Col. Herbert von Kuspen immediately try to assume command of the ship but meets resistance from both Monique Cadillac and Prochnow. The ship is then reinforced with "Principality's elite soldiers" — turns out to be a group of young cadets. To Monique's shock, her own younger brother Erwin Cadillac was part of the group. At Granada airspace they run into a small Federation forces, and Erwin leads a squad of three Oggos to engage in combat. After fierce fighting, it all ends up with only Erwin and a Ball pilot remaining, both have their weapons malfunctioned. Though he manages to convinces the Federation pilot to surrender, a stray shot from a Salamis class kills them both. Monique breaks down at her brother's death.

When the Jotunheim encounters a vanguard detachment of the Federation fleet, Monique piloting a Zudah and Kuspen in his custom Gelgoog help Oliver piloting MA-05Ad Big-Rang inflict heavy casualty on the Federation forces. Although the Big-Rang pushes back the first wave of attack, vengeful Federation soldiers eventually overwhelms and destroys the mobile armor, as well as killing Kuspen. As the retreating Jotunheim mourns the loss of their friends, a small group of survivor mobile suits approaches, among them an alive Oliver held by Monique's heavily damaged Zudah.

Oliver May introduces the AMX-002 Neue Ziel to Anavel Gato, with Monique Cadillac and Hideto Washiya (from Gundam 0083 Rebellion) 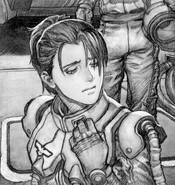 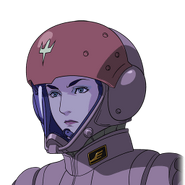 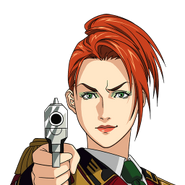 Retrieved from "https://gundam.fandom.com/wiki/Monique_Cadillac?oldid=449819"
Community content is available under CC-BY-SA unless otherwise noted.