The former head of the Earth Federation's Newtype Laboratory. She once headed the research of several Newtype children including Levan Fuu. After learning he only likely had a year to live, she allowed Levan Fuu to leave the laboratory, giving him an incense container, as with prior children who had left.

After the Newtype Laboratory was shut down, she became a Captain onboard the Spartan.

During the Battle of A Baoa Qu, Humphrey was stationed at a nearby satellite as a Federation special forces unit infiltrate the enemy stronghold and recovered two incomplete Zeong units, thus securing psycommu devices for the Federation.

Six months following the end of the One Year War, Humphrey was part of an aerial convoy traveling through the ruins of Sydney when they were ambushed by Zeon remnant aircraft, which were swiftly dispatched by the convoy's core fighters. Subsequently, the RX-78AL Atlas Gundam, piloted by Ensign Io Fleming, launched from the convoy and saved the Spartan from a Komusai kamikaze attack. Humphrey remarked to her aide on the success of the Atlas. 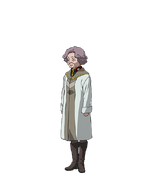 Add a photo to this gallery
Retrieved from "https://gundam.fandom.com/wiki/Monica_Humphrey?oldid=458592"
Community content is available under CC-BY-SA unless otherwise noted.