Momoka Yashiro (ヤシロ・モモカ, Yashiro Momoka?, commonly called Momo) is a character that appears in the Gundam Build Divers television series. She is the builder and pilot of the PEN-01M Momokapool.

Riku's and Yukio's classmate, who belongs to the girls' soccer club. She has an assertive personality and tries to persuade Riku to join the soccer club, too. Then she discovers the joys of Gunpla and GBN, and starts playing alongside Riku and his friends. She is a girl who firmly believes that cuteness equals righteousness.[1]

She, Riku and Yukio were in a soccer match.[2] When she first entered GBN, her avatar was a Haro as she was only a guest Diver.[3]

Momo is a Riku's classmate. She takes pleasure in building Gunpla models with Riku. 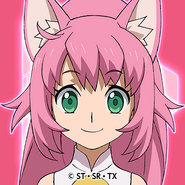 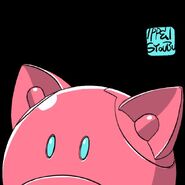