The Mock is a mass-produced Gunpla from the anime series Gundam Build Fighters. It was built by Plavsky Particle System Engineering.

Mock is an unmanned unit deployed by the Gunpla Battle system during battle with the computer. It can sport a wide range of head variations emulating various mobile suits. Besides the custom mock rifle, it can use a wide array of weapons borrowed from other mobile suits. The Mock is not based on any particular existing designs, instead it is developed by combining various characteristics found in mass produced MS such as the Zaku, GM and Death Army.

A custom rifle used by the Mock.[1]

The same 120mm machine gun as used by the Zaku series of mobile suits. It is a shell firing gun that does not require energy to be used, however its effectiveness against heavy armor is very limited. Uses a 100-round drum magazine.

The same 280mm bazooka as used by the Zaku series of mobile suit. It fires explosive rounds that are effective against the armor of mobile suits.

An axe-like melee weapon that utilizes thermal energy to superheat its blade, allowing it to slice through the armor of enemy mobile suits.

The same large bazooka as used by the Dom series of mobile suits. Its magazine contains 10 rounds, and a single round can blow the torso off of an enemy mobile suit.

A weapon that fired rocket-propelled explosives.

A sword-like beam weapon that is used for close combat, it is a fairly common weapon used in various forms by many mobile suits.

The same beam melee weapon as used by the RX-78-2 Gundam and a number of its descendants. It has a higher output than the standard beam saber, and the beam's shape allows for a greater amount of armor penetration. The long reach of the weapon provides a considerable advantage in close quarters combat.

The skull-headed magic staff of the Satan Gundam, usable as a blunt melee weapon. It can also generate various beam projections.

The Mock was a new product that was going to be announced at the end of the 7th Gunpla Battle World Championship. However, when the massive Arista under the championship arena went out of control, the hundreds of Mocks stored in the arena was activated. On their own, they were not very powerful, but their sheer numbers gradually overwhelmed the Gunpla fighters. It was only when the Arista was destroyed and the battle system deactivated that the Mocks shut down. Despite this setback, the Mock was later upgraded by Yajima Trading into the Hi-Mock and used as automated opponents included with their Gunpla Battle system.

A Mock with elements resembling the RMS-006 Jenice

A Mock with elements resembling the Satan Gundam equipped with Staff

Baker and Mashita sell Mocks on the streets of Arian 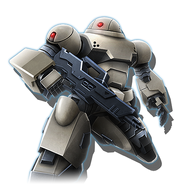 Mock
Hide groups Hide incoming properties
Information is currently being retrieved from the backend.
Retrieved from "https://gundam.fandom.com/wiki/Mock?oldid=497652"
Community content is available under CC-BY-SA unless otherwise noted.