The Mobile Suit Embedded Tactical Enforcer, or METEOR, is an armed module designed to support the nuclear-powered ZGMF-X09A Justice Gundam and ZGMF-X10A Freedom Gundam. It is well-armed with several missile launchers distributed throughout its body, a small pair of beam cannons at the sides, a larger pair of beam cannons in front and a pair of beam sword also at the front. Thanks to these heavy armaments, the METEOR has the firepower of a warship or even a mobile fortress, and the Justice Gundam and Freedom Gundam can use their "Multi Lock-On System" to target these weaponry at multiple enemy units and destroy them all at once. The unit has a pair of powerful engines that are derived from those used by ZGMF-1017M GINN High Maneuver Type for high speed movements, it also has its own internal battery, but is designed to draw energy from the Justice and Freedom when docked with either units. When not used by Freedom and Justice, the METEOR is attached to the hull of the FFMH-Y101 Eternal, a warship designed to support the Justice and Freedom, and can be used as gun turrets in this form. Two METEOR units are later retrofitted with nuclear reactors and N-Jammer canceller to allow non-nuclear powered MS to use them.

A powerful beam cannon that is mounted in the tip of each movable arm unit. The beam cannon's caliber is warship class and this makes it one of the most destructive weapons to be usable by a MS.

A pair of these smaller caliber beam cannons are mounted on the sides of the unit. They are weaker than the 120cm high-energy beam cannons but have higher rate of fire.

A pair of large beam swords that are emitted from the movable arm units, they provide the METEOR with close combat capabilities and can easily cut through warships and MS. Each beam sword is generated jointly by the emitters above and below the 120cm high-energy beam cannon.

The METEOR has a total of 77 missiles, 22 are mounted in each pod at the side of the unit, another 12 are mounted at the back of each arm unit, and lastly 9 are mounted on the tail fin. These missiles can be fired all at once for a devastating missile barrage and to destroy multiple enemy units.

Though a total of eight METEOR units were presumably built by ZAFT, only six are accounted for: METEORs 01 and 02, 05 and 06, and 07 and 08. METEORs 01 and 02 were used during the First Alliance-PLANT War by the Eternal as a part of the Three Ships Alliance. One was destroyed by the ZGMF-X13A Providence Gundam piloted by Rau Le Creuset in battle against the Freedom, the second one was used by Athrun Zala to pierce the Jachin Due armor and was presumably destroyed in the explosion of GENESIS.

During the Second Alliance-PLANT War, it is shown that the Eternal had two new newly built METEOR units (they were identified as "METEOR 07 and 08" by radar). The ZGMF-X19A Infinite Justice Gundam and ZGMF-X20A Strike Freedom Gundam used these two METEOR units to destroy one relay station of the Requiem superweapons, later Kira Yamato used his unit to critically damage the massive Mobile Space Fortress Messiah.

In Gundam SEED Destiny Astray, METEOR 05 and 06 are shown to be in Junk Guild's possession and refitted with nuclear reactors and Neutron Jammer Cancellers so that Gai's Blue Frame Second L and Elijah's custom ZAKU can use them to protect GENESIS Alpha from an EA attack. After the battle, Gai and Elijah returns the METEORs back to Junk Guild.

ZAFT also created a variant of the METEOR system, the Verne 35A/MPFM Multipurpose Flight Module, which lacks the METEOR's heavy armaments but can be used as a booster for a variety of mobile suits and shuttles. However, it can be equipped with missile launchers when used by mobile suits, as demonstrated when Jean Carry, in a MBF-M1 Astray equipped with the 35A/MPFM module attacked Ile De Llorar's RGX-04 Proto Saviour. 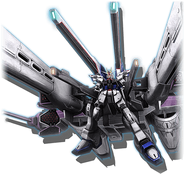 Retrieved from "https://gundam.fandom.com/wiki/Mobile_suit_Embedded_Tactical_Enforcer?oldid=457479"
Community content is available under CC-BY-SA unless otherwise noted.