1
Mobile Suit Z Gundam 1/2 (機動戦士ゼータガンダム１／２ U.C.0087 アナザーストーリー, Kidou Senshi Zeta Gundam Half) is a single volume manga written and illustrated by Yuuichi Hasegawa that was published by kadokawa Shoten in 2006.

This manga illustrates the "Diary of Edmund Edgar Smith ", an AEUG pilot who allegedly fought against the Titans in UC 0087. In UC 0138, however, some diary manuscripts were discovered that casted doubt on the truthfulness of Smith's diary. For instance, there is no proof that some of the cited mobile suits as well as individuals ever existed. The absence of other primary and secondary records causes further controversy as whether Smith's diary contains very obscure facts, or was entirely fabricated for unknown reasons. 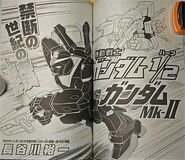 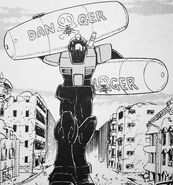