After another heated argument with Katz, Hayato recalls a conversation he previously had with Kai on a similar matter where Kai had come to realize that the Federation Government had become more & more corrupt ever since winning the One Year War - this is what Kai now refers to as "the truth" and wonders what will Hayato do when he comes to see "the truth" that Kai now sees clear as day. A few weeks later Hayato decides to join the Anti Earth Federation Organization "Karaba".

As Reccoa is returned from another "interrogation", Kai laments that it will not be long before the nuke hidden beneath Jaburo detonates, and the interrogators that care so little about them will see how little Jamitov cares for them. Kai remarks that if the A.E.U.G. can gain control of Jaburo before the bomb detonates then they may survive, Reccoa believes that if anyone can do it, it would be "Quattro". Kai finds this very amusing as he is very well aware of the fact that Quattro Bajeena is none other than Char Aznable.

Kai radios the Audhumla to inform Hayato that he has arrived at Hickory, he is also somewhat dismayed to have beaten the Audhumla to Hickory, as they now have such an impressive combat force there should be no need to such a roundabout route to avoid the Titans, however Hayato confides in him the sad truth that Amuro is no use to them at the moment but hopes that with some rehabilitation he will soon be back to his former glory. After finishing his call to Hayato, Kai goes to meet the pilot of Beachcraft who has landed, who introduces herself as Beltorchika Irma. 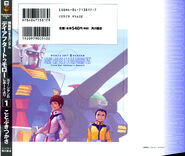