In celebration of Gundam's 25th anniversary (and also the 20th anniversary of Zeta Gundam), the 50-episode series was compiled into a new movie trilogy. According to Tomino, the movie series was created to fix some of the problems he identified in the Zeta TV series and to bring the 20-year-old series into a 21st-century context for the new generation now experiencing the increasingly commercialized series such as Mobile Suit Gundam SEED.The compilation digitally remastered the TV series of Zeta Gundam with new footage. 33% of the first film was remastered footage.

It is U.C.0087, seven years after the end of the One Year War. After the events of Operation Stardust, the Earth Federation establishes an elite counter-insurgency division called the Titans to hunt down the remaining pockets of Zeon remnants. The Titans become overzealous in their mission, start resorting to brutal methods to achieve their goals, and become nothing more than ruthless tyrants with an ambition to rule the Earth Sphere. Two anti-Titans resistance groups, the Anti-Earth Union Group (AEUG) and their earth-bound counterparts Karaba (led by Hayato Kobayashi), form to unite the various existing small forces in the struggle against Titans. Their members consist of renegade soldiers of the Earth Federal forces, former soldiers of Principality of Zeon, and militia from space colonies. Most notable is Bright Noa, who returns as captain of the assault cruiser Argama, the flagship of AEUG space fleet, and Quattro Bajeena, who is really the legendary ace pilot Char Aznable, the "Red Comet".

Kamille Bidan is a troubled civilian seventeen-year old from Side 7's Green Noa 1 colony. His personal resentment towards the Titans results in him joining the AEUG. Quattro takes Kamille under his wings and becomes his mentor. The series also sees the partnership and cooperation between Kamille and Amuro, and the tension between Amuro and Char. Behind the frontline, the resistance group AEUG and Karaba are supported by many companies on Earth and in space, particularly the moon-based corporations. Besides financial support, the lunar manufacturing giant Anaheim Electronics also provides logistics and technical supports for AEUG, including spaceships, mobile suits, and munitions. 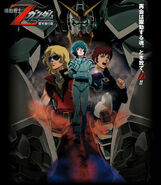 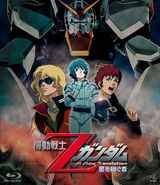