The first two parts are first person shooter, the first taking place on earth, the second in open space and ending with either a boss battle, ranging from a Musai to the Jupitris, Paptimus Scirocco's flagship, or simply a colony or asteroid (Gryps, Axis, etc.). During these levels, player's gun is visible on screen, and can aim at and lock-on to enemies while shooting. Following this is a standard platforming section which concludes the destruction of the ship, colony, or base's reactor.[1] Three power ups in the game include a shield, which prevents some damage, a beam rifle, which allows penetrating shots on the platformer portion, and health.

Hot Scramble consists of 16 primary levels, with enemy MS appearing in order roughly corresponding to their appearance chronologically in Zeta Gundam television series. After the 16th level is beaten, another series of levels loops endlessly, however if the 16th level is cleared, a game over will display credits with a looping sprite of Zeta pilot Fa Yuiry running, the rebuilt Haro bouncing at her side, as in the show's ending.

Similar to boss fights, at certain stages, Mobile Suits such as the Psyco Gundam, Psyco Gundam MkII, Pallas Athena, or Qubeley will appear and must be destroyed (one shot, unlike bosses which take multiple hits) for the player to proceed from either the ground phase to the space phase or, during the space phase, to the boss fight.

This game was actually the very first console game based on Gundam and there have been an immeasurable number since. The very first Gundam game was Mobile Suit Gundam: Last Shooting for the Japanese MSX computer which was released in 1984, predating Hot Scramble by two years. Last Shooting was based on the original Mobile Suit Gundam and was split between two parts: side-view levels where the player must avoid falling debris of a crumbling base, and shooting levels that feature an early cockpit view and resemble an early first-person version of Cabal (1988).

Bandai later released an edited version of the game as Kidō Senshi Z-Gundam: Hot Scramble - Final Version, an entirely first-person shooter, where the weaker side-scrolling platform levels were removed from the game.

At one point, Bandai had plans to release this game in the United States, under the title of just Mobile Suit Z Gundam, but was scrapped. 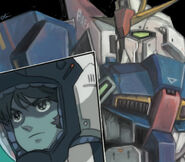 Retrieved from "https://gundam.fandom.com/wiki/Mobile_Suit_Z_Gundam_-_Hot_Scramble?oldid=356529"
Community content is available under CC-BY-SA unless otherwise noted.