7
Mobile Suit Moon Gundam (機動戦士MOONガンダム, 機動戦士ムーンガンダム) is a manga written by Harutoshi Fukui with art by Takayuki Kosai. It is published in Gundam Ace magazine by Kadokawa.

In U.C. 0091, in the space colony Moon Moon, a group of young colonists who have just turned 13 were led to the surface of the colony to learn the true nature of Moon Moon and the existence of Earth. Among them was the boy Jutta Qasim. Meanwhile, the Londo Bell, led by Amuro Ray, fight and defeat a group of Titans remnants, including a mobile suit equipped with advanced Psycommu weapons: the MRX-013-3 Psycho Gundam Mk-IV G-Doors.

One year later, the Psycho Plates used by the destroyed Psycho Gundam Mk-IV and its disembodied head became lodged in the surface of Moon Moon, damaging the colony walls. Meanwhile, the Atalante 3, a disguised Neo Zeon ship carrying Mineva Lao Zabi, was being pursued by the Ra Gills, a Clop-class cruiser belonging to the Londo Bell.

In order to contact outside help from the Colony Public Corporation, Moon Moon sent out a shuttle, with both Jutta and his grandfather onboard. However, the shuttle was accidentally caught in a battle between the Atalante 3 and the Ra Gills. During the chaos, Mineva was lost in space, but Agos Lagarto, a defective Neo Zeon Cyber Newtype, was able to find and rescue her with the help of Jutta's Newtype ability. The Atalante 3 crew agree to repair Moon Moon in exchange for giving them access to its port facilities, opening up the long-isolated colony to outsiders in four years... 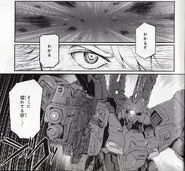 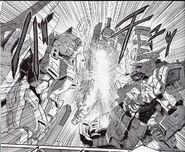 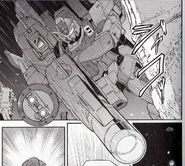 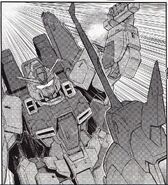 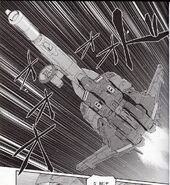