1 (Media Works), 2 (Dengeki Comics)
Mobile Suit Gundam in UC 0099: Moon Crisis (機動戦士ガンダムムーンクライシス, Kidou Senshi Gundam: Moon Crisis) was a manga series originally serialized in the magazine MS SAGA from 1993 to 1994, it was compiled into a compilation volume by Media Works. It was later reissued as two volumes by Dengeki Comics in November 1997 and January 1998. Taking place in an altered interpretation of the Universal Century, Moon Crisis is set in the same time-line of Outer Gundam and Mobile Suit Gundam REON, which were written by the same author.

Set in UC 0099, Federation Forces warrant officer Takuna S. Anderson is assigned the new Zeta Prompt prototype, and is deployed in space orbit to escort the Vectra. Three years had passed since the end of the third Neo Zeon conflict, and the world had seen nothing but peace since then. Takuna is charged with a high-altitude escort mission to get the Federal president moved by air, however, the presidential plane is attacked by an unknown group. This incident would set in motion a plan that would risk the survival of mankind.

Chapter.06 Time Until the Vanishing Point 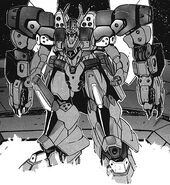 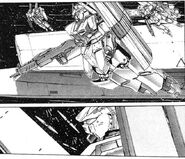