As the continuation of Zeta Gundam, this series once again follows the story of the Anti Earth Union Group (AEUG) battleship Argama after Kamille defeats Paptimus Scirocco. To fight off the Axis Zeon, now called the Neo Zeon, Captain Bright Noa recruits a group of teenage junk collectors led by the loudmouthed but powerful Newtype Judau Ashta to pilot the Argama's mobile suits. Now sporting a line up of the behemoth MSZ-010 Double Zeta Gundam and the returning MSZ-006 Zeta Gundam, RX-178 Gundam Mk-II and Gundam-like MSN-00100 Hyaku Shiki, the group is nicknamed the Gundam Team. As such, this became the first of a number of Gundam series where a team of Gundam mobile suits fight alongside each other regularly. The climax takes place at Side 3 in the Battle of Axis.

Out of the major Zeta Gundam characters, only recurring captain Bright Noa and Axis leader Haman Karn make more than cameo appearances in ZZ; Char Aznable's planned appearance was canceled when Tomino was given the go-ahead to do the Mobile Suit Gundam: Char's Counterattack movie. Yoshiyuki Tomino's original plan for the show which involved Char's return was neither revealed, nor does Tomino himself remember it. Aside from the openings, Amuro Ray does not make an appearance in the series either. 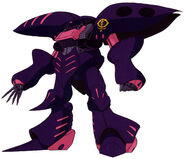 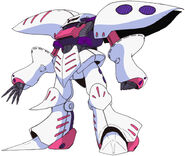 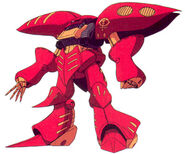 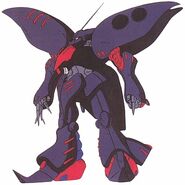 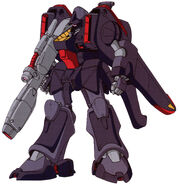 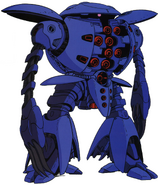 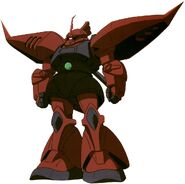 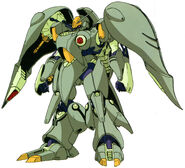 Mobile Suit Gundam ZZ was originally conceived of as a second season of Zeta Gundam, but it was ultimately decided that the show should feature an all-new cast, Tomino originally wanted Char as the main character, but he received the "okay" on Char's Counterattack. Nevertheless, its broadcast immediately followed that of Zeta Gundam and manages to tie up the Zeon remnant/Neo Zeon plotline from Zeta that was left unfinished.

As part of Tomino's tendencies to follow up a tragedy with a comedy (e.g. Space Runaway Ideon was followed by Combat Mecha Xabungle), this nominal sequel to Zeta Gundam struck a much lighter, often comical, tone, in contrast to its predecessor's brooding melodrama. For example, in the second episode, Captain Bright is reduced to defending the Argama from thrown oranges. Judau Ashta's first battle clearly lampoons the previous Gundam pilot's instant piloting ability by having Judau be incredibly poor at combat in his first battle, however his opponent is still quite afraid of him. The series is also infamous for its 14th and 15th episodes revolving around an old colony populated by technology-fearing primitives known as the Light Tribe, considered by many fans to be the franchise's lowest point up to then. The whimsical opening theme song Anime Ja Nai (It's Not Anime) reflected the non-seriousness of the first half of the series. The second half of the series does return to a more serious tone while sporting a more somber opening theme song. Because of its lighter tone and its slapstick humor, the series suffers a poor reputation among the serious-minded ranks of Gundam fandom, some of which even accuse Tomino of deliberately trying to sabotage the Gundam franchise. Despite this, it scored high ratings with the younger, more casual audiences, and the show's first opening theme Anime Ja Nai became extremely popular with anime fans and is sometimes mentioned as one of the most memorable anime songs of all time.

The series originally aired every Saturday from March 1, 1986 to January 31, 1987 on Nagoya Broadcasting Network.

The series got an English dub by Omni Productions which aired on Animax Asia (Philippines on May 2, 2005 rest Southeast Asia on May 25, 2005). The dub also aired on Animax India.

As announced by Sunrise at AnimeExpo 2013, from August 5, 2013, DAISUKI provided free Internet Streaming of the series with English subtitles.[1] The series was removed from DAISUKI sometime before June 2014. Gundam.Info later began uploading six subtitled episodes on their youtube weekly from mid July 2017[2]

Following the announcement of the partnership between Sunrise and Right-Stuf!/Nozomi Entertainment at New York Comic Con 2014, there was much anticipation for a North American release of the series.[3]

On March 2, 2016, at 15:03 CST, Nozomi Entertainment announced first ever North American release of Mobile Suit Gundam ZZ. Collection 1 will be released on Blu-ray on June 7, 2016, coinciding with the After War Gundam X Collection 1 DVD release. It will have Japanese audio with English subtitles.[4] On April 6, Nozomi Entertainment had announced that the second collections for both series would be available on July 5.[5]