The manga was also licensed and released in English, by Tokyopop in 2002 and in French by Pika Edition also in the same year.

The war is over, peace had its chance, and now revolution is in the air. A charismatic new leader has emerged, armed with the awesome might of the "Thirteenth Constellation," a new Mobile Suit type with awesome destructive power. With the Earth and colonies still recovering from a year of nonstop war, they are ill prepared to defend themselves, and a quick conquest seems imminent. The only hope for peace—the Gundams. Built for destruction, they brought peace once and now they must be wrenched out of retirement to do it one last time. 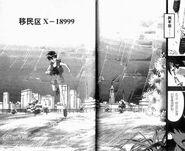 Published in 1998, the manga version of Endless Waltz was handled by Koichi Tokita, the man responsible for most of Gundam Wing's manga. While the manga cleaves most closely to the OVA, it has several additions and changes not present in either animated version. Please note that this list does not include minor dialogue changes.