The story follows the plot of the Gundam Wing TV series very closely, incorporating plot elements introduced in the prequel manga, Episode Zero, and the concurrently-running photonovel, Frozen Teardrop. Therefore, the manga acts as a retelling of the original animated TV series with all backstory and sidestory plot elements incorporated, as the 'complete' story.

As the manga is a retelling of the main series, please see After Colony list of characters for a character list

Please see After Colony Mobile Weapons for a list of Mobile Suits in the series. 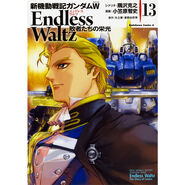 Cover for Episode 33, featuring the debut of the TV version of Wing Zero (a.k.a. Proto Zero) in the Endless Waltz continuity.