22
Mobile Suit Gundam Unicorn RE:0096 (機動戦士ガンダムUC RE:0096, Kidō Senshi Gandamu Yunikōn Ri Daburu Ō Nainti Shikkusu?) is a 2016 anime television series created by Sunrise. It is a broadcast version of the Mobile Suit Gundam Unicorn theatrical OVA released between 2010 to 2014. Helming the recut is director Kazuhiro Furuhashi and composer Hiroyuki Sawano returns to provide a new soundtrack.[1][2] It aired on TV Asahi Sunday at 7:00am JST from April 3 to September 11, 2016 and both the dubbed and subtitled versions are simulcast on Gundam.Info, DAISUKI and Crunchyroll.[3][4] North American and European streams via Gundam.Info are released 15 days after the initial airings.

U.C. 0096. Three years after Char's Rebellion, Banagher Links, a boy living at the manufacturing colony Industrial 7, meets a mysterious girl who calls herself Audrey Burne. Audrey claims that she is trying to stop the Vist Foundation from handing over Laplace's Box to the Neo Zeon remnants known as the Sleeves, an act which could spark another war, and Banagher decides to help her. But the colony becomes a battlefield as fighting breaks out between the Sleeves and the Earth Federation Forces, who have also come to stop the handover. As Banagher runs through the battle in search of Audrey, he has a fateful encounter with a white mobile suit, the Unicorn Gundam, which is the key to Laplace's Box.

What is Laplace's Box? What secret does it contain? The hundred-year curse of the Universal Century is about to be resolved.[4] 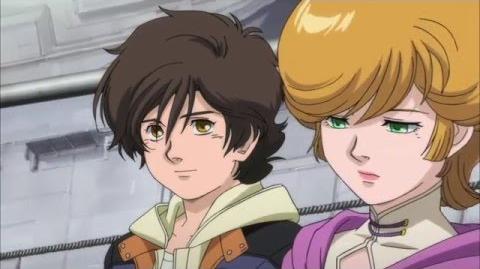