Mobile Suit Gundam UC: The War After the War

Mobile Suit Gundam UC: The War After the War

Universal Century 0094. It was a deal that was supposed to take place in complete secrecy. However, it goes completely awry with the appearance of a lone man on the battlefield and a Federation officer who ran away with classified information. It would later be told as the Sinanju hijacking incident: the tale that tells the before and after that was consigned to darkness. 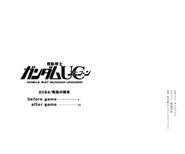