Mobile Suit Gundam Side Story 0079: Rise From the Ashes, also known as Mobile Suit Gundam Side Story: At the Site of the Fallen Colony... (機動戦士ガンダム外伝 コロニーの落ちた地で… Kidou Senshi Gandamu Gaiden: Koroni no Ochichita Chide...), is a video game developed by BEC (Bandai Entertainment Company, a subsidiary of Namco Bandai) and published by Bandai for the Dreamcast. It was first released in August 26, 1999. It is set in the Universal Century timeline of the Gundam meta-series and centers around the exploits of the White Dingo Team.

The game allows players to pilot mobile suits through a first-person cockpit view. It also requires the player to employ team-tactics with two AI-controlled teammates.

The player could normally choose from two mobile suits, the standard RGM-79 GM, a decent all around mobile suit, or the heavier RGC-80 GM Cannon, a mobile suit with a cannon attached to its shoulder. If a certain mission was completed successfully, a third mobile suit, the RX-77D Guncannon Mass Production Type, a heavy mobile suit with dual cannons on its shoulders, and a machine gun in each hand, could be unlocked.

The game has nine stages set all over Australia in an attempt to stop Zeon from developing and releasing Astaroth, a biological weapon capable of accelerating the growth of plant life on the Earth, turning it into an uninhabitable forest.

After completing the game, the player could open up an "Extra Options" menu with customizable "cheats" like Lunar Titanium Alloy (larger health bar) or certain weapons, like the Prototype Beam Rifle used in the GAW Assault Carrier mission.

Mobile Suit Gundam Side Story 0079: Rise From the Ashes begins eleven months after the beginning of the One Year War. The Earth Federation Forces (EFF) launched Operation Odessa, the Earth Federation's code name for the recapture of Europe from Zeon forces, and won resounding victories. The success of Operation Odessa caused a shift in military balance of power on Earth in favor of the EFF, and was followed by counterattacks against Zeon all over the Earth sphere. In Australia, the site of a colony drop and hardest hit by Operation British, Federation forces begin preparations for a large counter-offensive.

Machine Gun A light, rapid-fire weapon with 30 rounds, and no delay for reloading.

Rocket Launcher A heavier rocket launcher with only 8 rounds. It deals significantly more damage, and can stagger suits, but has a large reloading delay.

Prototype Beam Rifle Only selectable in one mission, this rifle holds enough power to destroy an enemy mobile suit with a single shot. It has a 6 shot capacity, and an extremely long reloading delay. Unlockable through the "Extra Options" menu.

Beam Spray Gun The original gun of the RGM-79 GM. A small beam handgun which shoots rapidly and has a fast recharge rate. It causes weak damage however. Unlockable through the "Extra Options" menu.

Beam Rifle A high powered beam rifle. It can shoot 12 shots before having to reload. It has a slightly shorter reload time than the Prototype Beam Rifle. Unlockable through the "Extra Options" menu.

Beam Saber A melee weapon, automatically activated when an enemy mobile suit closes in. It can take down an enemy suit with only a few swipes.

Hand Grenade Common secondary weapon for the RGM-79. They deal damage comparable to a rocket.

Shoulder Cannon This special weapon carries 16 rounds, and is found on the shoulders of the RGC-80 GM Cannon. They deal damage comparable to a rocket, and can be used with the scope to deal heavy damage to unaware enemy suits.

Shield (Large or Small) While technically not a weapon, activating thrusters and ramming an enemy suit with a small shield will deal damage and stagger both suits. Larger shields withstand more damage before being destroyed.

G-Beam Rifle The RX-78's beam rifle. It shoots 14 shots and has massive firepower, however its reload time is incredibly long. Unlockable via the Premium Disc's "Extra Options" menu.

Hyper Hammer Another of the RX-78's weapons, this propels a giant spiked ball at a mobile suit. It has a small range however, but has no recharge or reload time. It can deal massive damage if if it hits a target. Unlockable via the Premium Disc's "Extra Options" menu.

Released at about the same time as the original game, the Gundam 0079 Premium Disc was a special disc that could be ordered upon completion of the original Japanese version of Kidou Senshi Gundam Gaiden: Colony no Ochichita Chide....

It contained a small MS Simulator, which let the player battle against Amuro Ray in the RX-78 Gundam, as well as the RX-77 Guncannon, and RX-75 Guntank, from the original Mobile Suit Gundam anime. Upon completion, players were given a battle ranking, and could unlock certain things from the Extra Options menu.

The disc also includes a sound test option, missing from the original game, a gallery of MS artwork, and an Extra Options menu allowing the player to unlock special weapons, such as the Gundam's beam rifle, or hyper hammer.

This disc was never released in the United States, and will only work if the player possess an original completed save file from the Japanese version.

Astaroth was a bioweapon developed on Earth by the Principality of Zeon, that accelerated and encouraged the proliferation of plant growth at extremely high levels.

Australia, and the Federal forces stationed there, were hardest hit by the colony drop. Large cities and ports were also affected, primarily by adverse weather conditions caused by the impact, and presented severe problems in transporting supplies. Although Australia had come under Principality of Zeon military rule, their control was limited to a harbor in the south east. Most of the population of Australia began to rely heavily on the materials Zeon forces brought in as a lifeline. Due to this, resistance movements against the Zeon forces were minimal, and animosity grew towards the Federal forces instead, who were then branded as "traitors". Following the success of Operation Odessa, the Federation launched an offensive to retake Australia, deploying the White Dingo, Green Echidna, Yellow Quokka and Red Possum MS teams.

Refers to a diversion tactic masterminded by commander Walter Curtis for his Zeon forces as an exit strategy to retreat and gather in Africa. It was mistaken by Federation intelligence as Visch Donahue's "return to space" escape plan implemented at Hughenden Fortress. It is named for a natural phenomenon which can be observed at Broome, in the northwest region of Australia. 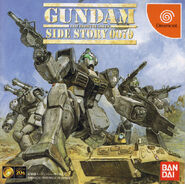 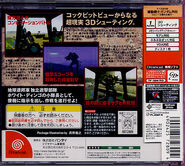