1
Mobile Suit Gundam Side Story: The Blue Destiny is a manga based on the Sega Saturn game developed by Bandai, written and illustrated by Takayama Mizuho, published by Kodansha and serialized by Comic BomBom in 1997.

Yuu Kajima is a soldier with the Earth Federation Forces during the One Year War, testing new technology before it's mass-produced. During a routine battle, he and his teammates come under attack from a mysterious blue Mobile Suit that attacks like a monster, barely escaping with their lives. Returning to base, Yuu is assigned to pilot that same machine - Blue Destiny. As he uses his new machine and clashes with Zeon ace Nimbus Schterzen, Yuu learns that there may be more to the enigmatic Blue Destiny and its EXAM System than he previously thought. 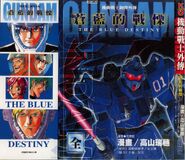