The MSGSS games are unique among Gundam games in and that rather than placing the player in a behind the shoulder third person view, they instead put the player in a first person view from the inside of the Mobile Suit's cockpit. They also make up the most significant entry in the "gaiden" Gundam games, those not based directly upon characters and events from the animated television series. The series and its heirs, such as Mobile Suit Gundam: Rise from the Ashes, are also known for gameplay that is grittier and more challenging than that of the Gundam games based on existing canon material. One of the primary reasons for this is that the protagonists are not Newtypes, but normal humans and they are forced to use mobile suits such as the RGM-79 GM, rather than the significantly more powerful Gundam.

The story of The Blue Destiny was adapted into a manga by author Mizuho Takayama and published in Haoh Magazine, under the same title as the compilation, Mobile Suit Gundam Side Story THE BLUE DESTINY, however the publisher folded before the story could be completed. Despite this, an English publisher Tokyopop released a translation of the manga in America, titled Mobile Suit Gundam Blue Destiny.

The manga adaption includes some minor story changes, including the introduction of new characters. While these elements are considered to be outside of The Blue Destiny's officiality, characters and Gundams from The Blue Destiny manga were still featured in various games from the SD Gundam G Generation series.

November, U.C. 0079, after the success of Operation Odessa, the Earth Federation Forces began forming units dedicated to collecting combat data for mobile suits under various circumstances. 2nd Lt. Yuu Kajima, who has been training to become a mobile suit pilot ever since the start of the war, was assigned as the leader of one such unit.

For their first mission, Yuu and his two teammates, Philip Hughes and Summona Fulis, piloting early production type RGM-79G GM Command, were dropped outside a Zeon base at night by Medea. Maureen Kitamura, the team's operator, recapped the mission objective for them: they were to attack the base under the cover of night and gather combat data against the Zakus defending it.

Maureen informs the team that an unknown mobile suit is rapidly approaching, destroying Federation units in its way. The team was forced to engage the mobile suit, which resembled a blue GM. It proved to be an extremely powerful opponent with incredible mobility. After receiving enough damage, the mysterious mobile suit was briefly stunned, before seemingly recovering and retreating.

Mission 3: Desperate Struggle in the Wilderness

During a training exercise in a desert, Yuu's team received an emergency order from Maureen. 3 kilos away from their location, a Dish discovered a Zeon mobile unit operating out of a Gallop. A Fly Manta squadron was able to immobilize the Gallop but unable to destroy it. The mobile unit deployed its mobile suits, and was attempting to repair the Gallop. Yuu's team was ordered to destroy the Gallop and its escorts.

During the mission, Philip mentioned rumors that the blue GM they fought was a Newtype-use experimental unit made by a defected Zeon scientist.

Yuu's team arrived at a Federation base to upload the collected combat data for analysis and conduct maintenance on their GMs. However, the base suddenly came under attack by Zeon forces, and the team was tasked with defending the base's power plant.

The third wave of Zeon attack approaches the base, which had already lost most of its combat strength during the last two waves, putting the burden of defending the base on Yuu's team. The third wave consisted of three MSM-03C Hygoggs, which attacked from the ocean.

After defeating the third wave, the fourth wave, consisted of three custom-painted MS-09B Doms, arrived at the base, apparently piloted by a trio of Zeon ace pilots. After a fierce battle, the Doms were finally destroyed. Philip and Summona praised Yuu's skills, calling him a top class pilot who has surpassed the Zeon aces.

Elsewhere, a damaged C-88 Medea was transporting the mysterious blue GM. Two unseen figures inside the transport, panicking, talk about how they were being pursued by a blue enemy who was after Dr. Chlust, shortly before the transport crashed.

Chapter 2: Heir to the Blue

Maureen informed the team that a Medea was shot down near them by a Zeon recon team. The team was ordered to defend the crashed Medea until other friendly units arrive, but Yuu was given a special mission: escort a helicopter to the crash site for investigation and recovery. The technician aboard the helicopter told Yuu that what the Medea was carrying must not fall into the hands of Zeon, and that he has heard of Yuu's reputation as an ace pilot.

After all of the Zeon mobile suits around the crash site were destroyed, a blue Zeon mobile suit appeared, its pilot thanking Yuu for wiping out the others so that he no longer needed to hide. The pilot introduced himself as Nimbus Schterzen and said that he will bury the "Blue Reaper" in the name of "EXAM". The new mobile suit was just as dangerous as the blue GM Yuu fought before, with incredible mobility and firepower. However, as Federation reinforcements finally arrived, the mobile suit, now revealed to be named Efreet, retreated.

Before leaving, the pilot remarked that the next time he and Yuu meet would be the end of both Yuu and "Blue". Meanwhile, the technician remarked that Efreet's movements were similar to "Blue", before seemingly realizing the pilot's identity.

The content of the Medea was revealed to be the blue GM that Yuu fought: the RX-79BD-1 Blue Destiny Unit 1, nicknamed "Blue". The technician aboard the helicopter. Alph Kamra, was its mechanic. Both Alph and the Blue Destiny were assigned to Yuu's unit, and Yuu became Blue's pilot. The team soon received new orders: Philip and Summona were to join the attack on California Base with a different unit, while Yuu supports them by destroying a Zeon missile base.

Before the mission, Alph explained that the Blue Destiny had much higher performance than the GM, and was equipped with the EXAM System, something the even he did not fully understand, saying that it was a wild horse and asked Yuu to rein it in. During the mission, he also revealed that the reason Blue went berserk before was that its system lost control, and its previous pilot was killed as a result.

With Blue's superior performance, Yuu was able to singlehandedly destroy the missile base's mobile suits, artillery defenses, and anti-air cannons, allowing Federation ground teams to land via helicopter. Alph remarked that Yuu was already controlling Blue like his own arms and legs, and the real battle has just begun.

Maureen contacted Yuu with urgent information: the base was planning to launch its missiles at California Base to prevent its recapture. With little time left before the launch, Alph convinced Yuu to activate the EXAM System in order to destroy the launch control facilities in time, wanting to collect data. However, the EXAM System can only operate for five minutes before the Blue Destiny overheats.

In the end, Yuu was able to destroy the five control facilities within the time limit. However, he knew that his victory was not because of his own strength, but because of the mysterious EXAM System.

Having destroyed the missile base, Yuu rejoined his teammates at California Base to finish off the remaining Zeon forces. Together, they were able to destroy all Zeon mobile suits in their section of the base. However, the Efreet suddenly appeared and challenged the Blue Destiny once again.

Nimbus realized that Yuu has mastered the EXAM System, and exclaimed that their battle will decide which one of them was the knight chosen by EXAM. As the two machines resonated, both activated EXAM System automatically. Alph contacted Yuu, shocked that the EXAM System activated on its own, and asked him to finish the battle within five minutes.

After a fierce battle, Yuu was ultimately able to defeat the Efreet, but not before it destroyed the Blue Destiny's head with its grenade launcher while Yuu's guard was down, much to the dismay of Alph, since the EXAM System and all of its collected data were located in the head. The Efreet attempted to escape, but soon exploded from the damage sustained. However, the body of the pilot was not found.

Meanwhile, Nimbus was revealed to have survived the destruction of Efreet and escaped in a Gallop. He was saddened by the loss of the Efreet, but informed by one of his subordinates that Zeon's intelligence division has located Dr. Chlust with another Federation EXAM machine. Ecstatic at finally discovering Chlust, Nimbus planned for his next move.

Just then, Maureen informed Yuu that the Federation has tracked the stolen Unit 2 to a shuttle base, which was preparing to launch it into space. Yuu was ordered to either recapture or destroy Unit 2 before it can be launched.

A one volume manga adaptation of the three Blue Destiny Sega Saturn games which were released in Japan on 1996 was published by Kodansha in 1997 and was authored by Mizuho Takayama, however, the manga only covered the events of the first two games and leaves out the final parts of the story. On October 15, 2002, a Blue Destiny novelization, written by Yuka Minakawa was also published by Kodansha. 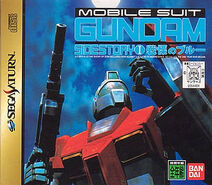 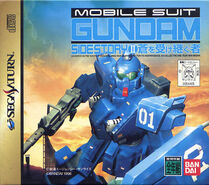 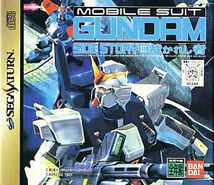 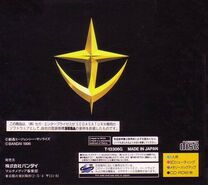 Typical MSG: Side Story back cover. 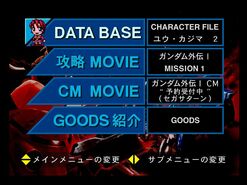 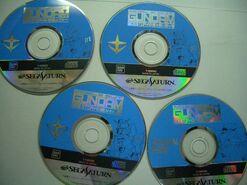 The discs for the MSG: Side Story series. 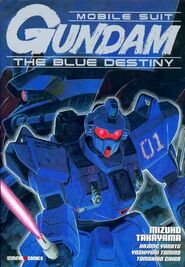 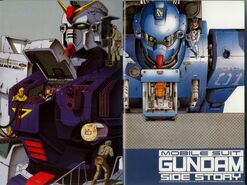 Retrieved from "https://gundam.fandom.com/wiki/Mobile_Suit_Gundam_Side_Story:_The_Blue_Destiny?oldid=469396"
Community content is available under CC-BY-SA unless otherwise noted.