Mobile Suit Gundam Side Story: Missing Link is a manga written by Tomohiro Chiba and illustrated by Junji Ohno. It is the manga adaptation of the PS3 game by the same name.

During the One Year War, in an attempt to replace losses in the Federation for mobile suit pilots, a penal battlion was formed called the Slave Wraiths. Led by Travis Kirkland, he and his team take on suicide missions in highly advanced mobile suits to make deadly surgical strikes into the enemy side. On the other side, the Marchosias, a regiment for Zeon elite pilot washouts was formed as well. When Doug Schneid, a former pilot of Zeon defects to the Federation with the Pale Rider in tow, both sides are forced to fight together to stop a conspiracy that lurks within the MS development research. 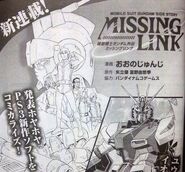 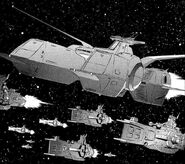 Assault of Dullahan
Add a photo to this gallery

Retrieved from "https://gundam.fandom.com/wiki/Mobile_Suit_Gundam_Side_Story:_Missing_Link_(Manga)?oldid=454574"
Community content is available under CC-BY-SA unless otherwise noted.