Serpent Tail is a neutral mercenary group led by Gai Murakumo that undertakes missions from either the Earth Alliance or ZAFT. Although a cease-fire agreement was signed between the PLANTs and the Earth Alliance, conflict did not disappear from the world. Therefore, there are ceaseless requests for the group. Serpent Tail completes these seemingly impossible missions with ease. Their presence is recognized even among rival mercenaries, who avoid combat with Serpent Tail. However, a hostile mercenary duo appears and their target is only one person, Gai Murakumo.

Gai come to Orb to maintain Blue Frame Second L when he is approached by 2 mercenaries : Dante and Elsa. Dante is one of the Combat Coordinators creators, so he knows Gai's past very well. While enjoying the reunion, Dante suddenly pulls out his katana and attacks a disavantaged Gai.

After Junk Guild maintained his personnal ZAKU, Elijah test it in South America jungle, although he regret not having his custom backpack. Even if it works without problems, Kazahan Aja told a discouraged Elijah how extraordinary is this lost. Meanwhile Dante win against Gai although he can't read something in his tactics.

Gai and Dante both prepared to fight each other. Dante made a deal with the organisation wich attacked him, although Gai talked with Reed about a Blue Frame specially customed to fight Dante. In the same time their repectives teammates clashed for the first time, Elisa with her personnal GOUF Ignited Custom, Elijah with his custom ZAKU, but without his special Wizard pack!

In an abandonned colony, Dante looked for the man who can create Katana blades for Mobile Suits. He fighted a Katana-equiped Red Frame, and show him how an outlaw fight while his opponent respect Bushi-do. In an Orb island, Elsa and Elijah fought again, but this time the later have his personnal Wizard and the two clashed at full power. As Elsa is gaining the upper hand, an ambush surprised her.

A rumor spread around the underworld : "Ame-no-Mihashira is about to fall", so guerillas, pirates and even armies attacked the Empress's sky castle. Yet, no one succeeded, because Gai Murakumo is in charge of the defense, but why? And where did the rumor come from? Why is it so different from truth?

On an isolated Orb island, Elsa, Elijah and Kazahana agreed to exchange informations, but Kazahana careless comment turned Elsa into a reaper. Meanwhile, Dante fought Un'no hand to hand, and Dante felt pleasure to fight a real Samurai. In the same time, Elsa came back to the Clan and discovered the repaired parts for her GOUF. The woman af the Clan has predicted everything. 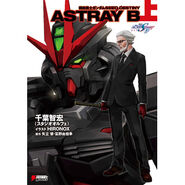