On January 29, 2005, a television special, Mobile Suit Gundam SEED Destiny EDITED[1], was exhibited between episodes 15 and 16. This special was a summary narrated by the voice actor of Sai Argyle, Tetsu Shiratori. The song Fields of Hope was used as an insert song. This special was never sold or included in any physical media distribution.

On December 25, 2005, a television special, Mobile Suit Gundam SEED Destiny Final Plus: The Chosen Future, aired featuring an extended ending of the series.

Just like the previous two Gundam series. An english dub produced by the Ocean Group aired in Canada on YTV From March 29, 2007 to March 28, 2008.

After the airing of the remastered final episode of Mobile Suit Gundam SEED, the HD remaster of Gundam SEED Destiny was quickly announced.[2]

Much like with Gundam SEED, the HD version of this series is planned for an English release as well, with a brand-new english voice cast that will be announced in the future once the production of Gundam SEED has been completed.[3]

Set in C.E. 73, two years after the peace treaty between ZAFT and the Earth Alliance was signed in Mobile Suit Gundam SEED, members of the Earth Alliance special task force known as Phantom Pain hijack three advanced mobile suits from a ZAFT armoury base during a meeting between Orb representative Cagalli Yula Athha and new ZAFT chairman Gilbert Durandal. What begins as a pursuit of this band of Extended Naturals by Orb refugee Shinn Asuka, Athrun Zala, and the crew of the LHM-BB01 Minerva, escalates into cataclysmic circumstances which lead to the declaration of yet another war.

Several compilations of the TV series, known as Mobile Suit Gundam SEED Destiny: Special Edition, have been released. The Special Edition is a retelling of the story in four 90 minute episodes. Unlike its counterpart, Gundam SEED: Special Edition, this retelling focuses on fixing some of the more criticized aspects of the series (for instance, focusing on Athrun Zala's point of view to keep the focus as neutral as possible) rather than simply editing together highlights and important battles.

An ONA sidestory called Gundam SEED C.E. 73: STARGAZER, was released on Bandai Channel between July and September 2006, with a DVD release In November 2006.

The anime has been adapted into a series of novels, by Goto Riu (the author of the Gundam SEED novels).

There are two manga adaptations of SEED Destiny, written by Mizuho Takayama and Masatsugu Iwase respectively. Another manga series, Mobile Suit Gundam SEED Destiny: The Edge by Chimaki Kuori, tells the events of the anime from the point of view of Athrun Zala. 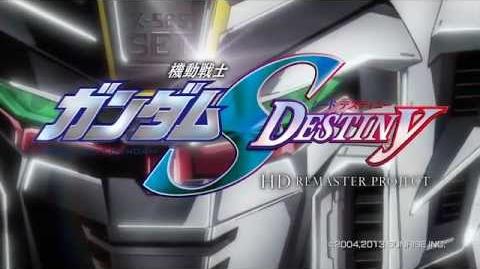