Δ Astray will follow a team dispatched from Mars to Earth for an as yet unrevealed purpose. The team is led by Ergnes Brahe, a 16 year old Coordinator. The other characters currently identified are Nahe Herschel, a 19 year old Coordinator, and Deago Lowell, a 16 year old of unspecified genetic type. Lowell came to Earth ahead of the rest of the team, aboard Lowe Guele's ship ReHOME, and thus is likely the previously unidentified Martian who stole the Astray Red Frame late in Destiny Astray.

The title mobile suit, the GSF-YAM01 Δ Astray (Delta Astray), utilizes a propulsion system called "Voiture Lumiere", which appears to be similar to the ZGMF-X42S Destiny's "Wings of Light". The Voiture Lumiere is used to capture solar wind with its light particles and convert it into a propelling force, allowing the mobile suit to accelerate indefinitely.

After the Δ Astray became heavily damaged, a new suit called the ∇ Astray (Turn Delta Astray) was introduced as the new title suit. Like the Δ Astray, the ∇ Astray utilizes the Voiture Lumiere technology.

The chapter opens with a short introduction of the result of the Fall of Junius Seven on earth and how due to the damage that was incurred because of its drop on the Earth, the possibility for another war becomes a reality.

Outside the Earth sphere at a DSSD supply station the Acidalium receives permission to dock from an operator. The operator exchanges in some banter with Nahe while the docking sequence completes. The operator comments that another war may break out anytime soon. Ergnes, listening in on the conversation, believes that starting another war can only be called foolish. Ergnes becomes visibly angered by the lack of concern the operator shows at the possibility proclaims that if it is necessary then he will destroy this station himself. He then orders the Acidalium to disconnect from the container to they can proceed with their mission.

The Acidalium and its crew then proceeds to the PLANTS where they hope to have a meeting with the PLANT Supreme Council, however they are informed that due to the state of emergency they are asked to wait in the observers room. While waiting they observe some ZAFT soldiers that have been dispatch to help with relief efforts on Earth caused by the Break the World incident. Nahe wonders if Mars will ever see an incident like this, Ergnes remarks that they are here to prevent this exact type of thing happening. They then receives a phone call saying that they will be able to have their meeting, however not with the Council but with the Chairman himself.

During Ergnes and Nahe meeting with chairman, Gilbert expresses an interest in the Australis Colony, a place where individuals have there Genes' altered to meet the specific roles that are needed to be filled, Ergnes assumes that the chairman is condemning what they do and verbally attacks Gilbert, saying that they have no other option when they have so few resources. Gilbert, apologizes saying that he meant no offense and that he was genuinely interested, and with the conclusion of the meeting he states that Mars will always be welcome at PLANT.

After leaving the meeting they are shocked by the appearance of Lacus Clyne and are informed by a ZAFT officer that the Earth Alliance has made a declaration of war. Ergnes incensed by this asks the chairman for permission to launch, Nahe expresses his concern over launching saying that they should just observe, Ergnes however is not able to sit idly by and watch as events unfold in front of them and launches in the GSF-YAM01 Δ Astray.

Ergnes proceeds directly to the battlefield and along the way destroys an Alliance Mobile Suit before he meets up with Yzak Jule and Dearka Elsman, Yzak informs Ergnes that he has transmitted Δ Astray identification to the ZAFT forces so he doesn't have to worry about being attacked by friendly forces. After Yzak and Dearka leave, Ergnes activates his Nuclear Generator and disengages the limiter and speeds through the battlefield destroying several Alliance units, until he is informed by Nahe that this was only a distraction and the main force has closed in on the PLANTs'. Suddenly the Neutron Stampeder is fired and the Alliance Nuclear missiles and ships are destroyed in one swoop. Ergnes is enraged after witnessing the reality of war and the "Terrans".

Coordinator; 16 years old; commander of the Acidalium and pilot of the GSF-YAM01 Δ Astray; highly impulsive; admires PLANT Chairman Gilbert Durandal and favors PLANT in the war despite the neutrality of the Mars colonies.

Coordinator; 19 years old; second in command of the Acidalium and pilot of the seemingly transformable mobile armor Guardshell.

Coordinator; 13-year-old girl (15 in CE 73) who helps Jess Rabble like an assistant, does all the chores and specializes in culinary arts; she is cheerful but also mysterious. She idolizes Lacus Clyne and has a necklace that is very similar to the one wore by Prayer Reverie. Setona is later revealed to be a Martian colonist and the older sister of Ergnes Brahe. However, as she traveled to Earth in suspended animation for several years, she is now younger than her brother. In late CE 73, she pilots the Turn Δ Astray to her brother's ship Acidalium, possibly to replace his crippled GSF-YAM01 Δ Astray.

After signing the Treaty of Junius as the successor of the Temporary Council, becomes the Chairman of the Supreme Council; pushes forward with Clyne's political ideals and is deeply trusted by the common people; currently seeking reconciliation with the Naturals; used to be a friend of Rau Le Creuset.

Coordinator; pilot of Duel in the First Alliance-PLANT War, gets a scar across his face from Kira after his cockpit gets stabbed by Kira's knife; joins Dearka in the final battle to fight OMNI Enforcer and save PLANT; after the war returns to ZAFT as commanding officer of the Jule Team; pilots a blue Slash ZAKU Phantom. His mother is PLANT Supreme Council member Ezalia Jule.

A singer who is impersonating Lacus Clyne for political reasons; accompanied by a red Haro. She was originally a big fan of Lacus', whose singing voice was almost identical to her idol's. Gilbert Durandal offered her the chance to help PLANT, and she jumped at the chance. After months of plastic surgery and image training, Meer began impersonating Lacus to keep PLANT morale high.

Codename: Jaguar 1;
Striker Pack: P202QX I.W.S.P
A reckless pilot, who one day wishes to win the heart of Cagalli Yula Athha through his achievements in battle. He tried to dispose of Vanfeltd by not working together, but Vanfeldt survived. He wanted to make the others weaken Ergnes so that he could do the finishing strike. Yet as he feigned to have to resupply his energy, Gard who was in charge of the supplying was attacked and neutralized by Isaac Mau. So Waid returned to the battle with Ergnes, but Sven's flight pack was destroyed by the Martian. Thus he took automatic control of Waid's Dagger and took his I.W.S.P pack, which sent Waid crashing into the ocean without the ability to fly.

Codename: Panther 2;
Striker Pack: AQM/E-X01 Aile Striker
A pilot who wants to progress in the lower noble families of Orb, and tries to do it through his achievements in battle. As he and the others are sent out to eliminate the Martians Vanfeldt cuts in the battle before Waid, but is ultimately betrayed by him when he orders them to do a "pincer attack". As Waid leaves the battle, Vanfeldt is left alone with Ergnes shooting him down leaving a scar across Vanfeldt's face. He later reappears, piloting a Destroy Gundam, but is defeated by Ergnes and his Turn Delta.

Codename: Leopard 3;
Striker Pack: AQM/E-X03 Launcher Striker
A rather calm, but not so sure of herself pilot. She stays close to Gard and starts bombarding the Martian ship, Acidalium through the battle but Isaac Mau attacks them, resulting in Sars having to escape from her Dagger Mobile Suit.

Codename: Cougar 4;
Striker Pack: AQM/E-X02 Sword Striker
An analytic pilot who takes no interest in superstition, but only in real facts. As a surprise move he anchors the Acidalium to the seafloor and climbs on board. He is confronted by Nahe in the Guarshell, believing his Dagger is far superior to a "Mobile Armor" he is soon overwhelmed. As the Guardshell is in fact a transformable "Mobile Suit", and incapacitates Hoskin & his "Dagger".

Codename: Tiger 5;
Striker Pack: P204QX Lightning Striker
A very protective pilot, he tries to keep his teammates safe, especially Sars. Yet as he and Sars starts bombarding the "Acidalium" in the battle outside of Orb, they are attacked by Isaac Mau. Both Mobile Suits are soon incapacitated by the ZAFT unit, and in his last words he tells Sars to run.

Coordinator; co-head of the Sahaku royal family of the Orb Union and sister of Rondo Ghina. More empathetic and calm than her brother. She pilots MBF-P01-Re2AMATU Gundam Astray Gold Frame Amatsu Mina.

Natural; 20 years old; pilot of the GAT-X105E+AQM/E-X09S Strike Noir Gundam and a member of Phantom Pain.

Natural; 22 years old; pilot of the GAT-X207SR Nero Blitz and a member of Phantom Pain.

Natural; 20 years old; pilot of the GAT-X303AA Rosso Aegis and a member of Phantom Pain. 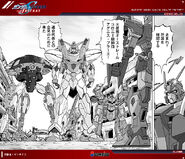 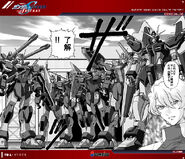 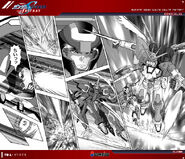 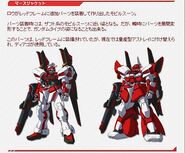 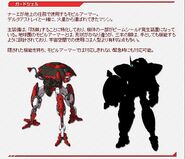 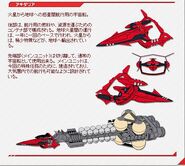