1
Mobile Suit Gundam REON (機動戦士ガンダムReon, Kidou Senshi Gundam Reon?) is a sequel to the Outer Gundam manga series and was released in 1996. It is set in the Universal Century and was written and illustrated by Masafumi Matsuura. The plot takes place in the year U.C. 0107.

Following another war with Zeon in the year U.C. 0107, a "gold rush" occurs on the Martian colonies, where rare metal production is booming. However, this vibrant economy generates wealth that becomes a source of funds for anti-Earth Federation groups. Corruption and other serious issues also plague the Federation.

However, with a vibrant economy that generates wealth funds are a source of funds for Anti-Earth Federation groups had caused any serious problems occurred within the Commonwealth.

Ruby Huggett is a young cargo ship captain belonging to a private Far Transport Service company. He had already been bereaved from his parents, and became a navigator for the ship Lupine, which his father had left behind.

During the transportation of the new heavy-duty MS at the request of the Earth Federation Forces, a battle occurs with the mysterious organization "FAMAS," which attempts to capture it, and Ruby unknowingly becomes involved in a conflict within the Federation Forces. 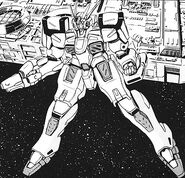 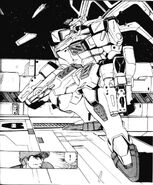 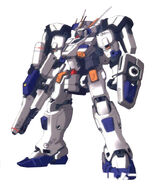