2
Mobile Suit Gundam Narrative is a manga written by Harutoshi Fukui and drawn by Kōzō Ōmori. It is published in Kadokawa Shoten in 2018 and seralized in Gundam Ace. 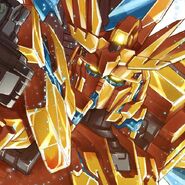 Retrieved from "https://gundam.fandom.com/wiki/Mobile_Suit_Gundam_Narrative_(Manga)?oldid=454039"
Community content is available under CC-BY-SA unless otherwise noted.