When the decision was made to turn High-Streamer into a movie, Tomino drew up a new story outline which added Beltorchika Irma and turned Amuro Ray into a family man. The sponsors didn't like the idea, and reverted to the original High-Streamer storyline, albeit with a few changes. Tomino later wrote a new novel based on his rejected movie plot.

In 2002, the novel was reprinted with new covers, new illustration and new designs by Chimaki Kuori. At this time the official title of the novel was changed to Mobile Suit Gundam High-Streamer.

In U.C. 0093, Char Aznable returns as leader of Neo Zeon, and is determined to drop the asteroid base Axis on Earth. Opposing him is the task-force Londo Bell, led by Amuro Ray and his ν Gundam. The final battle will take place over the Earth Sphere.

Illustration by Yukinobu Hoshino
Add a photo to this gallery

Illustration by Chimaki Kuori
Add a photo to this gallery 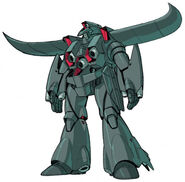 Retrieved from "https://gundam.fandom.com/wiki/Mobile_Suit_Gundam_High-Streamer?oldid=460587"
Community content is available under CC-BY-SA unless otherwise noted.