Mobile Suit Gundam Gihren’s Greed (機動戦士ガンダム ギレンの野望, Kidou Senshi Gundam Gihren no Yabou?) is a series of turn-based strategy games developed and published by Bandai, based on the popular Mobile Suit Gundam franchise. It takes its gameplay style from the SD Gundam series and adds political and military management to the One Year War. The title is derived from that of Nobunaga's Ambition, although the English title uses a different translation for the word yabou.

Released in 1998 for the Sega Saturn, Gihren's Ambition follows the path of either the Earth Federation or Principality of Zeon throughout the One Year War. The player has 150 turns to defeat the opposing side with either a scenario victory or a complete victory. Alterations can be made to the timeline, preventing deaths and disasters which in turn alter other timeline events.

Blood of Zeon expanded beyond the One Year War setting and into Zeta-era conflicts, introducing new factions to: AEUG, two factions of the Titans (one under Jamitov and one under Scirocco), Axis Zeon, Neo Zeon, Delaz Fleet. It also included two versions of the Zeon forces: Kycilia's "Legitimate Zeon" and Garma's "Zeon Reborn".

On release, Famitsu magazine scored the Dreamcast version of the game a 30 out of 40.

War for Zeon Independence adds an updated map system and military system to a rewritten script, several new characters, an updated spying system and Mobile Suits from MSV. The battles are fought in full 3D, unlike previous titles in the series. Unlike Blood of Zeon, this game focuses solely on the One Year War and only includes the Earth Federation and the Principality of Zeon. However, after completion of the game with each team, an option to use them in IF mode is unlocked. IF Mode allows the player to create their own team; choosing such options as a leader (or creating their own leader), their home base, which officers to start with, which technology group their faction is in and what units the player starts with. This also comes with a variety of scenarios to play through, with preset IF modes.

On release, Famitsu magazine scored the game a 33 out of 40.

The Menace of Axis

A noteworthy trait of the game is it featuring nearly every Gundam protagonist and antagonist that piloted a mobile suit or was on board a battleship. Features include two new difficulties, Very Easy and Special.

An expanded re-release, titled Gihren's Ambition: The Menace of Axis V, was released on the Playstation Portable and Playstation 2. It featured new characters and mobile suits from Z-MSV, Advance of Zeta: The Flag of Titans, Gundam Sentinel, and Hathaway's Flash. It also featured a bonus faction: Tem Ray's forces.

There are roughly 400 units featured in this version of the video game. Unlike previous games, however, event scenes do not have animation: instead there are more than 400 still scenes created in collaboration with Sunrise to represent important events.

New Gihren's Greed replaces the faction selection system of the previous game with a character selection system. In addition to scenarios focusing on the supreme commander of a faction, there are also scenarios that focus on pilots (e.g. Amuro Ray) and field commanders (e.g. Dozle Zabi). It also introduces characters and units from Mobile Suit Gundam Unicorn.

Asterisk (*) denotes mobile weapons that were introduced in Gihren's Greed 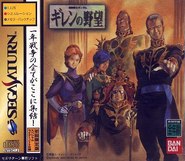