The film is double-billed with Mobile Suit SD Gundam The Movie: Musha Knight Command: SD Gundam Scramble, an OVA based on the SD Gundam franchise.

Originally planned as a full-length television series, Gundam F91 hit a production snag due to staff disputes, and the project was stopped after the screenplays for the first thirteen episodes were written. It was then decided that what was made of the show would be condensed into a theatrical feature film. Condensing a story originally intended to be told over the course of fifty half-hour episodes into less than two hours of screen time required much of the original story to be cut.

The story of Gundam F91 revolves around teenage space colonist Seabook Arno, his girlfriend Cecily Fairchild, and the efforts of the Crossbone Vanguard militia, led by Cecily's grandfather Meitzer Ronah, to establish an aristocracy known as "Cosmo Babylonia". In keeping with Gundam tradition, the civilian Seabook is forced by circumstance to pilot the F91 Gundam F91, coincidentally designed in part by his estranged mother, Dr. Monica Arno.

The Gundam F91 story was fleshed out in much greater detail in Tomino's two-part novelization. Tomino's manga, Mobile Suit Crossbone Gundam, is a direct sequel which takes place ten years after the events of the movie.

The year is U.C. 0123. To accommodate the growing population, the Earth Federation has built new space colonies. However, the Crossbone Vanguard decides to seize these colonies to help establish its extraterrestrial empire. Now, reluctant hero Seabook Arno and his Gundam F91 must lead a fierce struggle for survival.

The movie was made available on the Gundam.Info YouTube channel on November 7 11:00 JST as part of Tamashii Nation 2020 [1] 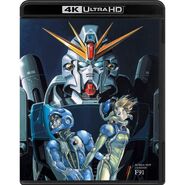 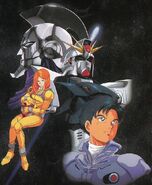