The main protagonist of the story. A secondary school year two student and a regular of the soccer club. Kurono always believed that he possess some hidden talent.
First piloted the Gundam to fend off the Zakus that were chasing Aiko. He is still an amateur at piloting MS and was beaten badly in the first few confrontation with the mysterious enemy. Currently he is undergoing MS training at the Nishimikado House.
In the second battle against Blitz, Kurono shows Newtype abilities.

A spacenoid. The original pilot of the Gundam. Aiko and her brother was attacked in the midst of transporting a new MS and crash landed on Earth where she meets Kurono. Aiko was amazed at Kurono's ability to pilot the MS when he took over the controls from the then injured her.
She appears to be from the future of another dimension. She was really excited when Kurono brought milk for her as she say farming in space colonies is difficult and milk is expensive there.

A secondary school year 3 student in the same school Kurona attend. But actually he is the 18th head of the Nishimikado family that has been protecting the "Gundam" for 500 years therefore it is not strange that he is an expert at piloting MS. The Nishimikado family has a big corporation and owns a large-scale MS factory.
The ancestor of the Nishimikado family is Morris Aluna Pruna, Aiko's brother, who too fell to Earth but to a time 500 years before. So it makes Aiko the grandaunt of Sakuya. Sakuya also pilots the Moless' Zeta Gundam outfitted with musha armor.

So far the main antagonist. He appeared piloting a Gundam X which attacked Aiko and Morris. He and his troops descended on Earth to pursue the Gundam. He later retrieved a H.L.V from the ocean. He has set up a dimensional gate on an island which brought the 5 Gundams from Gundam SEED to their time. He is always seen with sunglasses on.

Her name has yet to be revealed. After their parents died, she and her brother Tokio lived together. She got Aiko to live together with them and treats her like a family member.

Butler of the Nishimikado family, the person who provides support for Sakuya in various aspects.

Aiko's brother and the former pilot of the Z Gundam. Became missing after Aiko and the Gundam was attacked by Gundam X in the midst of its transportation. But actually he fell into a time slip and ended up in Japan 500 years ago, he started the Nishimikado family and remained in the area. His Z Gundam is passed down to later generations of the Nishimikado family.

Many units from the previous Gundam series appeared and will appear in this series. Here is a list of the main units.

First piloted by Aiko then now Kurono. In episode 6 Aiko speak of it as a "special machine". It is revealed in episode 11 that this Gundam has some sort of Psycommu system equipped.

First piloted by Moless then now Sakuya. Since the falling of the Zeta Gundam it has been passed down from generations in the Nishimikado family for 500 years. The Zeta Gundam now is clad in musha armor and has a katana as its main armament. However, in episode 0 Sakuya is seen piloting the Zeta Gundam without its armor.

The first Mobile Sui piloted by the mysterious sunglasses man, which he used to attack Aiko and Moless.

The Mobile Suit that appeared out of the dimensional gate with the four other G Project Mobile Suits in episode 7. 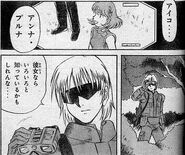 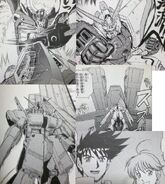