Mobile Suit Gundam AGE (機動戦士ガンダムAGE, Kidō Senshi Gandamu Eiji?) is a Mecha Action role-playing game game developed by Level-5 and published by Namco Bandai Games. Considered as an adaptation of the anime of the same name, the game is divided into two versions: Universe Accel (ユニバースアクセル, Yunibāsu Akuseru?) and Cosmic Drive (コズミックドライブ, Kozumikku Doraibu?), with each version having differences in the additional content. Both games have been released on August 30, 2012.

The story mode largely follows events from the original anime series, however, it is also possible to proceed through the story differently than from the series. A number of original Wears are featured in the game. Apart from the story mode, various "cross-play" missions can be cleared by up to three players.

For the Plot of the Game, please see Mobile Suit Gundam AGE for more info. 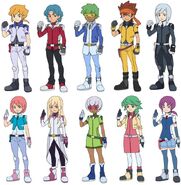