The Gundam Wiki
Register
Don't have an account?
Sign In
Advertisement
in: Advanced Generation, Series, OVAs and ONAs

July 26, 2013–July 26, 2013
Mobile Suit Gundam AGE: Memory of Eden is a project to recompile the Second generation of the television series to better illustrate the trials associated with the characters of that of Asemu Asuno and Zeheart Galette in relation to their friendship and their ultimate adversarial relationship as foes on the battlefield.

In the year 140 A.G., the war between the Earth Federation and the group of Mars colonists known as Vagan, continues to rage on. In the opening battle, the Vagans attempt to destroy a space colony, with a squadron of Federation forces, lead by Woolf Enneacle, holding them off while the colonists evacuate. On one of the escaping ships, Vagan spies Zeheart Galette and Daz Roden successfully manage to bypass Federation officials, and make their way to the Tordia Colony with the objective to destroy it. At Tordia, Asemu Asuno, son of high ranking Federation commander Flit Asuno, attends school, where he is part of its Mobile Suit Club, and is greeted by his childhood, Romary Stone, who wishes him a happy birthday. Later that night, Asemu’s family, including Flit, have a birthday dinner to celebrate his seventeenth birthday, where afterwards Flit shows Asemu the AGE-1 Gundam AGE-1 Normal. Flit gives Asemu the AGE Device, saying that with it is now his mission to protect his loved ones and fight the Vagans, and also mentions he will write a letter of recommendation for Asemu to attend a top rank military school. The next morning, Asemu laments that his father wants him to be a soldier, and crosses path with Zeheart, with both taking notice of the other. Zeheart, now having readied his mobile suits, begins the attack, with a groupf RGE-B890 Genoace II's counterattcking. Asemu notices the commotion and rushes back home to retrieve the Gundam, picking up a wounded Romary along the way. Asemu sorties the AGE-1 and confronts the Vagan’s ovm-e Dorados, and while initially struggling, he soon defeats them. Surprised by the appearance of the Gundam, Zeheart, in his xvv-xcr Zedas R, and Daz double team Asemu, but the young Asuno is able to hold them both off until Federation reinforcements arrive, forcing the two into retreat. Vargas Dyson, Asemu's great grandfather, has the Gundam relocated to a Federation base, and Zeheart and Daz are ordered to remain at Tordia until reinforcements can be sent.

New Scenes and Changes from the TV Series 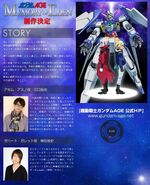 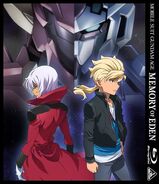