Mobile Suit Gundam AGE (機動戦士ガンダムAGE, Kidō Senshi Gandamu AGE?) is a 2011 anime television series. It is a collaboration between Sunrise and video game developer Level 5. The series is directed by Susumu Yamaguchi and premiered on Japan's MBS and TBS stations on October 9, 2011. This series is also simultaneously broadcasted on Bandai's official video portal Gundam.info with English, Chinese (Traditional) and Chinese (Simplified) subtitles. An English dub of this show has also had its first overseas TV broadcast premiered in MediaCorp's Okto Channel in Singapore on 16 June 2012.[1] On August 25th, 2012, it was confirmed in the magazine "Kadokawa Shoten's Gundam Ace" that Gundam AGE would come to an end after the 49th episode to be aired on September 23, 2012. Also, the last four episode titles and summaries were released.[2][3]

Mobile Suit Gundam AGE takes place over the course of a century that encompasses the "One Hundred Years War". Mankind had migrated to space colonies several centuries ago, with wars on Earth having long ended. Suddenly, during the Advanced Generation (AG) Year 101 an Unknown Enemy (UE) appears and starts to attack Earth and colonies starting a full-scale war. They destroy the space colony "Angel" in a disaster later referred to as "The Day the Angel Fell". In AG 108, the UE attack a once peaceful colony known as "Orvan". Flit Asuno, a seven-year-old boy at the time, had his mother killed in this attack. Before she died, she gave him the Asuno family heirloom—the "AGE Device " memory unit. Using plans hidden within this unit, Flit begins to develop the mobile suit "Gundam", humanity's last hope.

In the year AG 115, Flit Asuno, now age fourteen, lives on the colony "Nora" in an Earth Federation Forces military base named "Aliston". After seven years of research and development collaborating with the EFF, Flit completes development of the AGE-1 Gundam AGE-1 Normal, allowing it to self-evolve through combat experience. The UE finally begins an attack on the colony "Nora" and now Flit has no choice but to fight with the Gundam.

The First Generation follows Flit and the crew of the battleship Diva, as they begin the Federation's first major counterattack against the UE. Along the way, Flit meets many people who make lasting impressions on his life; Yurin L'Ciel, a girl from Nora who displays mysterious psychic powers, and whom Flit develops a romantic interest in, Woolf Enneacle, a Federation ace mobile suit pilot, who becomes Flit's friend and comrade, and Desil Galette, a young boy who displays a streak of cruelty and keeps an eye on Flit and the Gundam during their travels. Also, unbeknownst to the crew, their captain, Grodek Ainoa, has actually stolen command of the Diva from the Federation and is now being chased as a wanted man. When the crew learns of his status, Grodek reveals his intentions, that he has learned who the UE really are, where their base is, and that he plans to use the Diva and the Gundam to launch an assault on them so take his revenge on the UE for killing his family, when they destroyed colony Angel. While initially shocked, Flit and the crew decide to follow Grodek, and after recruiting help, launch an attack on the UE's mothership, Ambat. It is here that Flit has a reunion with Desil, who reveals to working with the UE, and Yurin who is being held hostage and forced to fight by Desil. The three way battle results in Yurin's death, Flit's awakening as an X-Rounder (the AGE equivalent of a Newtype), his defeat of Desil, and the cementing Flit's hatred for the UE for the rest of his life. The Diva manages to break through the UE's defenses and into Ambat, where a grief-stricken and angry Flit fights against the fortress's leader, Geera Zoi, and his xvm-gz Defurse. Ultimately, Flit defeats Geera and the Diva crew succeeds in capturing the base, and they learn the UE's true identity. The UE are actually humans, who were sent to colonize Mars due to the overpopulation on Earth, but were then left to die by the Federation when a deadly disease known as Mars Rays surfaced and and killed many colonists. Embittered, the surviving colonists repopulated and formed their own nation, Vagan, with the ultimate goal of returning to the Earth, and claiming it as their own. Despite the victory, the crew of the Diva are court-martialed, but Grodek takes the blame for all their actions, and thus only he is imprisoned. The crew disbands, and the First Generation ends with the war between the Vagan's and the Federation only having just begun.

Twenty five years have passed since “The War of Bat Extermination”, where the Diva crew and the Gundam defeated the Vagan main force in the Earth Sphere. During that time, Flit Asuno had become the commander of the Federation’s main space defense fortress, Big Ring, and had also married his childhood friend, Emily Amonde, and raised two children, Asemu Asuno and Unoa Asuno. On Asemu’s 17th birthday, Flit gives him the Age Device, passing on both the Gundam and the mission of fighting the Vagan’s to his son, and thus beginning Asemu’s journey.

The Second Generation revolves around the Vagan’s attempt to land on the Earth and Asemu’s relationship with Romary Stone and Zeheart Galette, the latter of whom is a Vagan. Upon learning of Zeheart’s real identity and his declaration of being Asemu's enemy, Asemu and Romary join the military a year after his departure, and are assigned aboard the Diva, at which point Asemu is given the successor to the Gundam AGE-1, the AGE-2 Gundam AGE-2 Normal. Throughout the war, Asemu struggles with the fact that he is not an X-Rounder like his father and Zeheart, and develops a need to prove himself. Also adding to Asemu’s frustration are the facts that no matter how hard he tries to impress his father, Flit constantly expects more from him, and that Romary, whom Asemu is in love with, seems to show more interest in Zeheart. Woolf, Asemu’s commander and mentor helps the young pilot, by making him more aware of his own strengths and focusing less on being like his father. After many clashes, the Vagan’s begin their final attempt to land on the Earth, in what is known as “The Battle of Nortrum”. During the battle, Woolf is killed, causing Asemu to fully embrace Woolf’s teachings about focusing on his own strengths, thus drastically improving his piloting skills. In the final stages of the battle, the Vagan’s battleship, Downes, threatens to crash into Earth, so Asemu and Zeheart team up to save the Earth, and successfully destroy the ship, but unbeknownst to the Federation forces, this allowed for the Vagan forces on board the ships escape pods to land on Earth.

One year later, the Vagan forces on Earth, lead by Medel Zant, attack the Federation capital, but are intercepted by Asemu. Meanwhile, Flit and the military arrest Prime Minister Froi Olfenoa, as he has been conspiring with the Vagan’s. The battle ends with Asemu finishing off Zant and Flit reaffirming his goal of wiping out every last single Vagan. Following this, Flit leads the military to purge the government of every last Vagan conspirator, and thus establishes a new rule for the Earth Federation. Elsewhere, it is revealed that the Vagan supreme leader, Fezarl Ezelcant, has placed Zeheart in cryogenic sleep so that he may take part in the next phase of their plan in the later future. A few years later, Asemu returns to his home colony of Tordia, where he and Romary are married in the presence of their friends and family, thus ending the Second Generation.

The Third Generation starts from AG 151 where Romary Asuno gave birth to Kio in a hospital in the City of Olivernote on Earth. However, his father Asemu has to go on his final mission as an Earth Federation Forces Pilot moments after he was born where he has to investigate a derelict ship before he suddenly went MIA, the military search party then discovered Asemu's AGE Device during their search and handed it to his own father Flit, which then passed it onto Kio.

13 years passed and Kio grew up to be a gentle young man. While riding on a car his friend bought, they encountered a Vagan mothership with the Vagan leader Fezarl Ezelcant declared a full-scale invasion of Earth as the final phase of his plan to take back their former home, led by a reawakened Zeheart Galette in his Ghirarga along with several Danazines, collaborating with the Vagans hidden on Earth with their Dorados in an attack on Olivernote. All this happened just after the defense fortress "Big Ring", who is under a different commander now, was destroyed by a giant Vagan mothership. Kio and his friends escaped on the car but he saw three children who were trapped, so he and his childhood friend, Wendy Hearts rescued the children and brought them to safety before being evacuated by the Earth Federation Forces stationed there.

Believing the Gundam can stop them, he was nearly attacked by a Danazine before Flit came in with his carrier and Kio boarded it, only to reveal that this was actually the Core Fighter, one of the two components of Gundam AGE-3. After Flit asked the Diva to launch, the second carrier that contains the other component, the G-Ceptor was launched at the same time, allowing Kio to pilot the Core Fighter form the Gundam AGE-3 Normal by docking with the G-Ceptor in mid-air with Flit's guidance. It was then that he realized why Flit bought Kio the MS Battle Simulator while he was a little kid, it was to prepare Kio for the time that he inherits the Gundam AGE-3 for himself to protect his home and the ones he cherish, something that Flit and Asemu once did in their own generation.

The Three Generation Arc starts from one month where Kio was rescued by his father and Bisidian from Vagan's Second Moon. After returning to Earth, Kio rejoins the crew of Diva piloting the AGE System's ultimate mobile suit, AGE-FX Gundam AGE-FX.

Fighting together for the first time, Flit, Asemu and Kio lead the Earth Federation Forces and the Bisidian in a successful attempt to recapture the Federation's main base on the moon from the Vagans. After Asemu locates and destroys the EXA-DB to ensure that neither side claims it, the Earth Federation and the Vagans focus all their efforts in one final battle at Earth's orbit. The battle ends when the Vagan main colony "Second Moon" is about to be destroyed, and Kio managed to convince Flit to abandon his grief about destroying Vagan and rally both the Federation and Vagan soldiers to work together and save the colony. After the conflict ends, the humanity had gathered the data from the AGE System and the EXA-DB to create the Everse System to nullify the Mars Rays, and Mars Sphere became a safe place to live. 37 years later (201 A.G.), Flit becomes remembered as a savior who united all mankind for a brighter future.

The four Generation Arcs are listed as follows: 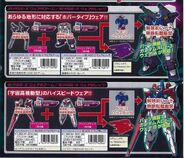 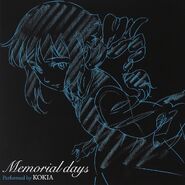 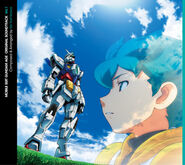 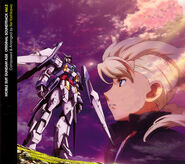 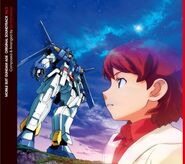 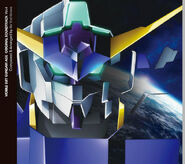 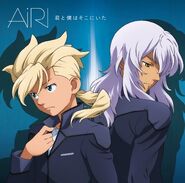 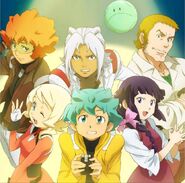 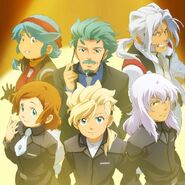 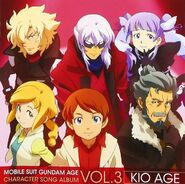 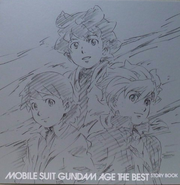