1
Mobile Suit Gundam 00I 2314 (機動戦士ガンダム00I 2314, Kidou Senshi Gandamu 00I 2314?) is a manga side-story sequel to Mobile Suit Gundam 00I written by Tomohiro Chiba and illustrated by Kōichi Tokita. The manga follows the story of two new Celestial Being recruits, Leo Sieg and Dell Erda, during the events of Mobile Suit Gundam 00 The Movie -A wakening of the Trailblazer-. The story was first published in Gundam Ace , running from November 2010 to February 2011. Kadokawa Shoten published the single compilation book on January 26, 2011.

Chapter 1: Those Who Silently Intervenes

2314 AD. While the Earth Sphere Federation government promotes a policy of reconciliation, Celestial Being protected the world discreetly. The crew of Ptolemaios started working on the development of new Gundams and at the same time, the support organization Fereshte was reorganized as a detached force and continued their intervention activities behind the scenes. To do this, Fereshte has acquired the 3.5 generation Gundam variants. But while the Gundams had an enormous influence as a deterrent, its impact upon the world was far too great, so the Fereshte actively conceal their Gundam's actions. At this time, two new members join Fereshte, Gundam Meister Leonard Fiennes and Delphine Bedelia. Leonard, piloting the GN-006/SA Cherudim Gundam SAGA, was sent to destroy a former Fereshte asteroid base that was taken over by terrorists and he took out two guarding Tieren Space Types during the process. Meanwhile, Delphine participated in the GN Drive development at the Jupiter base with Hayana, and they later returned with the GNT-0000 00 Qan(T)'s GN Drives from Jupiter.

Chapter 2: The Area Where the Ship of Disaster Fell

2196 AD. Near Jupiter, a third of the crew of the Europa research station that had been constructing the GN Drives were lost. After their completion, the GN Drives were sent back to Earth via unmanned capsules piloted by Haros created by an Innovade named Sky Eclipse, a friend of Lars Grise. After the launch, one of the scientists killed the remaining members, ejected every data terminal he could find, and set the satellite on its self-destruct sequence. The GN Drives and the Haro were recovered later on.

At Celestial Being's asteroid base, Delphine and Hayana delivered the newly completed GN Drives to Ian Vashti. On Earth, Leonard tracks down a schoolgirl with latent quantum brainwaves. On his way there, he encounters the ELS copy of Sky Eclipse, who kidnaps the girl. After the ELS partially assimilated the girl, Lars appears and aims his gun at it, but Leonard intervenes, not wanting to harm the girl. The ELS copy of Sky goes back inside the house were it transform into airplane and tries to escape. Leonard follows it with the GN-007/AL Arios Gundam Ascalon and takes it down. The ELS airplane crashes to the ground, but the remains of the airplane turns back into Sky. Believing the threat to be eliminated, Leonard retreats back to base, unaware that the Arios Gundam Ascalon had a piece of ELS stuck onto it.

At an ESF research laboratory, Billy Katagiri and Mehna Carmine analyze a piece of the ELS, and Mehna explains that around the world, people with high quantum brainwave latency are being targeted by the ELS. Elsewhere, as Louise is about to be assimilated by Sky, Setsuna fires a shot at the helmet to divert his attention, and mistakens Sky for Ribbons Almark. Lars watched these events unfold while hidden nearby. Setsuna fire shots at Sky, but the latter absorbed the shots and kept walking towards the trio silently until Setsuna used plastique, which caused Sky to explode, but left only the bottom half moving until it shattered into metallic fragments. Once Setsuna and the others left Lars came out from hiding. He goes toward the remains of Sky and recalls his time spent with him.

While returning to base, Leonard was contacted by Chall and was assigned his next mission to destroy an abandoned facility containing ELS remnants. Leonard destroys the facility with GN missiles, but the explosion caused ELS fragments to scatter toward the Arios Gundam Ascalon. The ELS fragments start to assimilate the Arios Gundam Ascalon, and Leonard was forced to crash his Gundam into the ground as he ejected from it. The assimilated ELS Arios rises from the ground and corners Leonard. Lars in a jeep fires a grenade launcher at the ELS Arios and rescues Leonard. Later on, Delphine recovers both Lars and Leonard. Elsewhere, Hayana recovers the MSJ-06YIII-B Tieren Kyitwo from an abandon HRL base. Delphine and Leonard battle the ELS Arios with Tieren Kyitwo and manage to defeat it. After the battle, a large group of ELS teleports to Jupiter's Big Red Spot and heads for Earth. Leonard begins to experience intense headaches as he senses the ELS and his eyes' irises also glow.

Chapter 4: Journey to a New Dialogue

The Earth Sphere Federation announce a large-scale emergency of ELS approaching Earth. Leonard piloting the GRM Gundam sorties to battle a groups of ELS near the orbital elevator. The ELS chase Leonard due to his quantum brainwaves and begin to transform into GN-XIVs. Eventually the GRM Gundam was hit by three ELS GN-XIVs. Leonard's Gundam was almost assimilated by the ELS when fellow Gundam Meister Setsuna F. Seiei teleported to the ELS homeworld, stopping the assimilation process. Leonard himself was partially infused with the ELS. The ELS also transformed the damaged GRM Gundam into the GRM Gundam E. In 2364 AD, Leonard, now a member of ESF, pilots the GNW-100A Sakibure as one of the crew of the Sumeragi. Acting as a scout, he teleports away ahead of the Sumeragi. At the same time, the GNT-0000 00 Qan[T], now infused with ELS, return to the Earth Sphere. 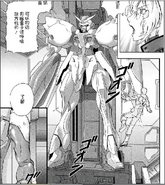