Mobile Suit Gundam 0083: Rebellion is a manga written by Takashi Imanishi and illustrated by Masato Natsumoto. It is published by Kadokawa Shoten and serialization in Gundam Ace since June 2013. However unlike other manga reinterpretations of the original source material such as Zeta Gundam Define and Gundam Wing Endless Waltz: The Glory of Losers, 0083 Rebellion is closer to that of The Origin in how it deals with the original materials events.

A half century has passed since mankind moved its burgeoning population into gigantic orbiting space colonies. From there, a war stemmed from the oppression of these space dwellers (Spacenoids). No one would imagine that in just one month of fighting half the human population would perish. It would later be called the One Year War. A colony drop onto Australia. The greatest tragedy in human history started here. Now, the curtain rises on the destined battle of two men.

Chapter 12: One Who Takes a Stand

Chapter 14: Enemy on the High Seas

Chapter 15: A Running Fight on the Indian Ocean

Chapter 20: Attack and Retreat on the Burning Sand - Part I

Chapter 21: Attack and Retreat on the Burning Sand - Part II

Chapter 23: A Flag of Surrender

Chapter 30: A Declaration of War

Chapter 36: The Lunar Surface Confrontation! and... 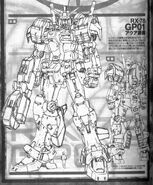 Retrieved from "https://gundam.fandom.com/wiki/Mobile_Suit_Gundam_0083_Rebellion?oldid=354025"
Community content is available under CC-BY-SA unless otherwise noted.