During the closing days of the One Year War in December 0079, the Iron Scorpion elite corps of the Zeon forces led by Colonel Cranberry is ordered to destroy their own 18th Supply Base in Tanzania, Africa, because it has sensitive information that must be hidden from the advancing Earth Federation Forces. 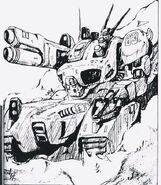 Retrieved from "https://gundam.fandom.com/wiki/Mobile_Suit_Gundam_-_Burning_Pursuit?oldid=350100"
Community content is available under CC-BY-SA unless otherwise noted.