This story takes place during December 0079 U.C. where two brothers are forced to traverse the North American territory as the rear guard of the retreating Principality of Zeon forces using MSM-04 Acguy amphibious mobile suits after the Principality fails to capture the Earth Federation's headquarters at Jaburo, however it is not long before these two brothers are the only ones left alive and are faced with the prospect of traveling over two thousand miles, without supplies and back up. 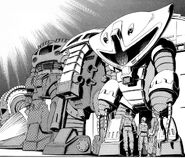 Retrieved from "https://gundam.fandom.com/wiki/Mobile_Suit_Gundam_-_Acguy:_2250_Miles_Across_North_America?oldid=458099"
Community content is available under CC-BY-SA unless otherwise noted.