Mobile Suit Gundam: Zeonic Front is a video game based in the One Year War that was released in September 2001 for the PlayStation 2 home entertainment system. The game departs from the standard formula of Universal Century video games by featuring a campaign focused on the Principality of Zeon, rather than the Earth Federation, though the game does enable simulations where the characters can act as members of the Federation, as well as the ability to unlock Federation pilots as playable characters within the Zeon campaign.

In addition to its two major gameplay modes, Zeonic Front features a cutscene viewer, as is common in action games. Of the available movies is an extended clip featuring reanimated footage wherein the main character of the game narrates the major events of the One Year War, largely following the White Base, from the perspective of Maj. Garret Schmitzer, the commanding officer of the Zeon task force Midnight Fenrir Corps. The movie covers everything from the beginning of the war to the signing of the peace treaty that ended it in at least moderate detail.

The campaign of the game follows a Zeon squad known as Midnight Fenrir, under the command of Maj. Garret Schmitzer. As the commanding officer of the Corps, Schmitzer is a veteran of the One Week War and injuries sustained at the hands of Lt. Agar in this battle forced him to give up his role as a mobile suit pilot. The Midnight Fenrir Corps were then founded by RADM Kycilia Zabi as an elite fighting force to serve her directly in her personal objectives. Being a tool of Kycillia this naturally means that the Midnight Fenrir often end up fighting directly for other individuals in her service, such as Char Aznable and M'Quve. Following is a story and mission summary as the game progresses:

The Midnight Fenrir Corps are assigned to assault a Federation air base. During their assault they encounter a Big Tray, however with Schmitzer's advice Midnight Fenrir is able to exploit a weakness in the Big Tray's defenses and destroy it.

Midnight Fenrir is assigned to break through an enemy defense line consisting of powerful gun emplacements. Kergerenko introduces herself to them for the first time as their operator. The attack is a success and a Zeon officer congratulates the Fenrir Corps for their performance.

Midnight Fenrir is given orders to seize an underground enemy submarine dock. Despite having an operational time of just over five minutes Midnight Fenrir is successful and forces the Federation troops to surrender before their submarine teams are able to launch.

In the mission that is their namesake, Midnight Fenrir is assigned to break begins movement towards the S3 Point. They encounter mobile suits and are forced into midnight combat. Midnight Fenrir proceeds to wipe out all enemy forces in the given area.

The Midnight Fenrir Corps are tasked to assist in defending a Zeon supply base in the Gobi desert, fending off attacking GMs and destroying a Federation command vehicle.

In a very risky operation, Midnight Fenrir is sent on a mission to gather information on the White Base and its mobile suits. Using superior tactics and strategy they outmaneuver the White Base and its MS, successfully gathering the data and avoiding the certain destruction that would result from any engagement with these units.

The Midnight Fenrir are sent along with the remaining Black Tri-Stars, Gaia and Ortega, to the area near Odessa Mining Base. The Fenrir encounter great resistance, but seize victory by counterattacking against a Federation Big Tray land warship.

The Fenrir are assigned to the rear defense line to defend a disabled Dobday-class land battleship from waves of Federation mobile suits. Despite the hordes of MS units and tanks, the Fenrir defend the ship until its crew evacuates.

Shortly before reaching their rendezvous with their Jukon-class, the Fenrir are instructed to defend a team of HT-01B Magella Attack Tanks from a Federation assault in Europe.

The Fenrir participates in Zeon's attack on the Federation's South American HQ, Jaburo. Cutting their way through the massive complex, the team squares off against a Trojan Horse-type battleship as well as a new Gundam.

Battered from the failed operation in Jaburo, the Fenrir retreat to California Base. However, the Federation begin their invasion of the facility. The Fenrir must defend a group of Zaku units from waves of mobile suits and aircraft.

With the Principality launching all of its Earth-based resources into outer space to continue the war, the Midnight Fenrir decide to stay on Earth to defend the last H.L.V. from the Earth Federation. While defending the H.L.V., the Fenrir must confront the completed RX-78-6 Gundam Mudrock once and for all.

The Fenrir, having retreated from California, receive a distress call from the No. 11 Supply Corps. Confronted by waves of Federation mobile suits, the Fenrir make one last stand to defend their allies. 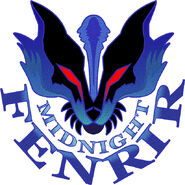