5
Mobile Suit Gundam: The Origin MSD Cucuruz Doan's Island (機動戦士ガンダム THE ORIGIN MSD ククルス·ドアンの島, Kidō senshi Gandamu THE ORIGIN MSD Kukurusu Doan no Shima?) is a manga serialized in Kadokawa Shoten's Gundam Ace magazine. It is a spinoff of the Mobile Suit Gundam: The Origin manga to commemorate the 15th anniversary of its debut. [1] It began running with the June 25, 2016 issue. The manga features Cucuruz Doan as the titular character based on the Mobile Suit Gundam character who only appeared in the episode Cucuruz Doan's Island from which this manga's title was inspired by.

The story centers around the Principality of Zeon's Y-02 Development and Training Team after the desertion of the unit's commander, Cucuruz Doan.

It is serialized in Gundam Ace and also available in Japanese on Comic Walker. 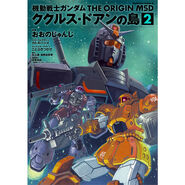 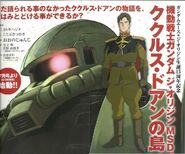