Mobile Suit Gundam: The Light of A Baoa Qu

1
Mobile Suit Gundam: The Light of A Baoa Qu (機動戦士ガンダム 光芒のア・バオア・クー, Kidou Senshi Gundam: Koubou no A Baoa Qu) is a manga written and illustrated by Ark Performance, published by Kadokawa Shoten and serialized in Gundam Ace magazine in 2010. Released with the manga MSV-R: The Return of Johnny Ridden.

The story takes place in U.C. 0084 in the form of a video documentary. It is based on interviews with soldiers and officers of the Earth Federation and the Principality of Zeon who participated in the final battle of A Baoa Qu during the end of the One Year War in U.C. 0079.

Act I: Battle of A Baoa Qu

After the conclusion of the One Year War, the Earth Federation Forces and the Federal government established a war history research committee. This committee collected a large amount of data from various sources in order to reevaluate Gihren Zabi, the supreme leader of Zeon during the war. However, though it was able to uncover many important facts, including the Gihren assassination plan, it was still unable to accomplish this goal.

The sixth intermediate report of the committee focuses on the final battle of the war, the Battle of A Baoa Qu. This report includes numerous interviews, from both Zeon and Federation soldiers who participated in the battle. The committee believed that this was the best way to piece together Gihren Zabi's final moments during the war and serve as a lesson for all mankind.

After Zeon's loss of Earth following Operation Odessa, Gihren did not allow the battered retreating troops to return to the homeland, since it would affect the morale of citizens. Instead, he diverted them to Solomon, Granada, and A Baoa Qu, anticipating attacks on these locations. Unable to return home and recuperate, these soldiers were forced to retreat once more after the loss of Solomon and head for A Baoa Qu. The interviewee, Antonio Rezia, was one of them.

An engineer from the 4th Guards Brigade, 5th MS Company, where he was responsible for maintaining the fusion reactor of mobile suits. He came to admire the major of his unit, a brave man who fought with his men to the end, commanding the mobile suits despite being seriously wounded. Though he wanted to find the major's family and hand over his belongings and death certificate, he was assigned to Solomon, then A Baoa Qu.

Though they were sent there as reinforcements, the situation had become so chaotic that they did not even receive official orders, and mostly served as runners and security guards. Rezia did not mind, since the situation in Solomon was nearly the same, though he noted that unlike Solomon, there was a large number of young cadets in A Baoa Qu.

Since A Baoa Qu's intercom circuits are limited, only a certain number of exchanges can take place simultaneously, and unimportant information had to be delivered using runners. On the day of the battle, Rezia was working as a runner between the central command room and the secondary command room. As he was leaving the command room, he realized something was wrong, following the gaze of others in the room, he saw Gihren's lifeless body float to the ceiling. It was only after smelling ozone in the air that he realized what happened: the smell was produced by the firing of a laser, and the only person in the room with a laser gun was Kycilia Zabi.

After Brigadier General Twanning transferred command to Kycilia, Gihren's body was placed in a corner of the room, apparently because nobody wanted to touch it. Unsure what to do, Rezia stood dumbstruck in the room, and was ordered to move the body to the medical center for autopsy. After calming down, Rezia shed tears, saddened that he is the only company to such a great man.

After the autopsy, Rezia moved Gihren's body to the morgue. He wanted to return to his post, but a military police ordered him to stay and guard the body. While there, he thought about many things: the meaning of the war, fallen comrades, and plans for the future. After some time, four soldiers took away the body and ordered him to return to his post. After that, he was taken prisoner by the Federation soldiers who captured the fortress. He was imprisoned for half a year before returning home.

Rezia explained that he had retold this story hundreds of times ever since, and that even though he was unsure where Gihren's body went, one of the soldiers that took the body mentioned "Zanzibar". He then gave the box containing the major's possessions to the interviewer, asking them to give it to his family if they ever find them. Saying that he only knew that his wife took his son and daughter to Side 6. He then showed a photograph of the major and revealed that his name is Lance Garfield.

The end caption states that this footage was recorded before the Gihren assassination plan was uncovered, and that Gihren's body remains undiscovered to this day. 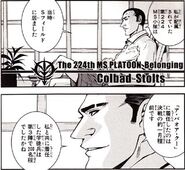 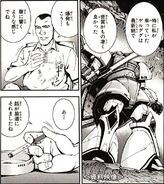 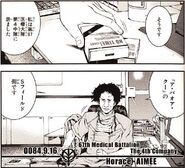 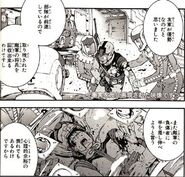 Retrieved from "https://gundam.fandom.com/wiki/Mobile_Suit_Gundam:_The_Light_of_A_Baoa_Qu?oldid=450620"
Community content is available under CC-BY-SA unless otherwise noted.