Mobile Suit Gundam: The Blazing Shadow (機動戦士ガンダム ブレイジングシャドウ) is a novel written by Toshiyuki Itakura, It was first published by Kadokawa Shoten on 25th May 2013 in the July issue of Gundam Ace.

The story sets at the Side 7 colony after The One Year War between the Principality of Zeon and the Earth Federation ended. The protagonist character Cain Ragnard's parents were killed by Zeon's mobile suit Zaku II during the war. For the vengeance of his parents, Cain joins the Earth Federation's special force "Shadows" to hunt down the remnants of the Zeon menace. His main mobile suit is RGM-79SP GM Sniper II Custom. 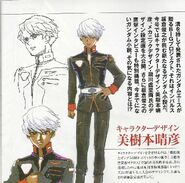 Retrieved from "https://gundam.fandom.com/wiki/Mobile_Suit_Gundam:_The_Blazing_Shadow?oldid=468757"
Community content is available under CC-BY-SA unless otherwise noted.