The 08th MS Team travels through the jungle while on a mission, Shiro Amada checks his map and stops when he spots a long bridge up ahead that spans a wide river, when they are attacked by a group of Zeon soldiers. 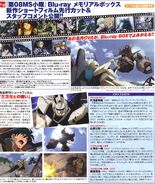 Retrieved from "https://gundam.fandom.com/wiki/Mobile_Suit_Gundam:_The_08th_MS_Team_-_Battle_in_Three_Dimensions?oldid=505743"
Community content is available under CC-BY-SA unless otherwise noted.