Following an attempt to capture (or destroy) a new Zeon mobile armor, the incidents involving Shiro Amada of the 08th MS Team were called into question by officers in the Earth Federation Forces. In order to investigate suspicions into the claims that Shiro Amada might be a Zeon spy, Alice Miller is sent to carry out interrogations on Shiro Amada and the rest of the 08th MS Team. Meeting Shiro in the hangar containing the remains of the Apsalus II, Miller uses a combination of inhaled and ingested drugs to form a truth serum on Shiro Amada, sending him into a trance.

Alice Miller records her conversation with Shiro Amada as he recalls the events that took place after his Gundam attacked and subsequently became lodged into the Apsalus II and taken deep into the nearby harsh mountain range blanketed by a blizzard as the Zeon mobile armor attempts to escape. Working together with Aina Sahalin, Shiro is able to survive in the harsh environment until they are rescued by their respective military forces.

Using the information gathered, Shiro is brought in for an inquest, to account for his actions. During the inquest, Shiro reveals his views and personal feelings of the war.

After the successful defense of the village, Shiro and the 08th Team are given the final mission to assault a Zeon base deep behind enemy lines with a possible survival rate of only 38%. The final mission given to them would end up being the team's last sortie together as the war with the Zeon forces on Earth came to a close shortly after.

(In Order of Appearance)

(In Order of Appearance)

The movie premiered in Japan on August 1, 1998 along with the theatrical version of Mobile Suit Gundam Wing Endless Waltz, as part of GUNDAM: THE MOVIE (ガンダム・ザ・ムービー, GUNDAM: THE MOVIE?) [1]. The movie was made available for online streaming in select regions as part of Gundam Online Expo from August 20, 2020. 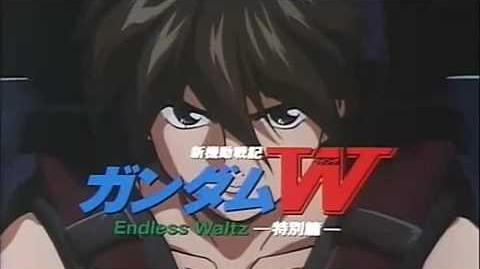