Spirits of Zeon is an arcade light gun shooter playable by up to two players. Players control one of two Zaku pilots, Kurt Roswell and Robin Bradshaw.

There are four types of weapon: the Zaku machine gun, the Zaku bazooka, the heat hawk, and cracker grenades. The machine gun has unlimited ammo, but still needs to be reloaded (which is done by dodging behind cover). The bazooka can destroy enemy shields with a single hit, but has limited ammo, which can be picked up in the stages. The heat hawk is used to destroy nearby enemies. It has unlimited uses, but cannot be used consecutively. The cracker can be used behind cover, and briefly stuns all enemies on the screen.

While Dual Stars of Carnage has a linear story mode, Memory of Soldiers allow the player to select from a number of different stages. Once eight stages have been completed, the player will face the final boss, Amuro's Gundam.

A new feature added in Memory of Soldiers is special attack. During boss battles against bosses, it is possible to fill up a special gauge by countering their close range attacks with the heat hawk. Completely filling the gauge allows the two Zakus to perform a special attack, which changes depending on which player initiated the attack. Doing so instantly defeats the boss.

Another new feature added by "Memory of Soldiers" is the medal system. Medals can be earned in stages by completing certain actions, such as defeating certain enemies or defeating the boss with a special attack. Two secret bosses need to be unlocked by collecting a certain number of medals: a battle with Gundam Alex in the Ribo colony and a battle with Zephyranthes Full Burnern near Confeito (which, according to the ending, takes place during Operation Stardust).

The game follows two Zeon Zaku pilots, Kurt Roswell and Robin Bradshaw, who were together known as the "Dual Stars of Carnage", through their battles during the late stages of the One Year War, from the attack on Jaburo until the final battle at A Baoa Qu. Throughout the game, they battle many powerful adversaries, including the Thoroughbred team, the Immortal 4th team, and eventually, Amuro Ray himself.

After the Battle of A Baoa Qu, the two pilots follow Char Aznable's Gwazine to Axis. The ending slides reveal that the two would later go on to assist the Delaz Fleet during Operation Stardust. Eventually, the two would join Char's Neo Zeon, and their ultimate fates are unknown.

Since there are many inconsistencies between the game's plot and other established media, the plot of this game is said to be an in-universe work of fiction in Gundam Ace's "GAME'S MSV".

The following is a list of missions in the game. All mission names were added in Memories of Soldiers.

Stage 1-1 in Dual Stars of Carnage. The Dual Stars drop into the jungle around Jaburo and fight their way into the base itself through waves of Federation mobile suits, before destroying a large anti-air battery that was firing at the Gaws above.

Stage 1-2 (Easy) in Dual Stars of Carnage. Inside Jaburo, the Dual Stars engage in a competition with Char to see who could shoot down the most Federation mobile suits. They witness the battle between Char and the RX-78-2 Gundam before entering a hangar full of inactive GMs and destroying them all.

The Pegasus Flies Not

Stage 1-2 (Easy) in Dual Stars of Carnage. The Dual Stars enter the Jaburo space dock and fight their way to the Pegasus-class 3rd ship, which was still under construction. Despite being incomplete, the Pegasus-class's weapons were fully functional, and the two engaged it in battle, ultimately destroying it.

Stage 1-3 in Dual Stars of Carnage. The Dual Stars fight their way through the Jaburo underground city. Just as they were about to reach the command center, they encounter a RX-78-1 Prototype Gundam piloted by Farrell Iha. They fight and destroy it.

Escape From the Underground Base

Memories of Soldiers original stage. Zeon command orders all forces to pull out of Jaburo. Realizing that the attack has failed, the Dual Stars destroy the command center and begin escaping to the surface.

Menace of the Big Tray

Stage 2-1 in Dual Stars of Carnage. The Dual Stars defend New Yark from a Federation attack under an unnamed Zeon officer piloting a MS-07B-3 Gouf Custom. The battle was going poorly, and they receive the order to retreat to the base. They encounter a Big Tray and destroy it.

Stage 2-2 in Dual Stars of Carnage. The Dual Stars enter the New Yark city center to escape their Federation pursuers, but the city was crawling with Federation forces.

Stage 2-3 in Dual Stars of Carnage. The Dual Stars finally reach the New Yark HLV base, which was already under attack by Federation forces. They were ordered to destroy all of the RX-75 Guntank in the base, which were preventing the HLVs from launching. However, they were soon attacked by a team of RX-79［G］ Gundam Ground Type, piloted by Barry Balzary, Nao Jessica Parker, and Sebastian Kurie, but were able to fight them off.

Just as they were about to board an HLV, they were confronted by the entire Balzary team at once. However, they were able to defeat them. As the Federation main force approached the base, the unnamed Zeon officer stayed to hold them off, and asked the Dual Stars to take care of Solomon for him.

The Defense of Solomon

Stage 3-1 in Dual Stars of Carnage. As Dozle Zabi deploys in the Big Zam, the Dual Stars also deploy in their new MS-06R-2 Zaku II High Mobility Type. Shin Matsunaga asks them to stop the Federation Forces from pushing deeper into Solomon.

Order to Defend the Secret Weapon

Memories of Soldiers original stage. The Dual Stars have to defend Solomon's hatches by shooting down approaching Federation missiles.

Stage 3-3 in Dual Stars of Carnage. The Dual Stars learn that the Solar System is about to fire a second shot at Solomon. They fight their way to a space dock inside Solomon to take shelter from the blast, only to encounter a FA-78-1 Full Armor Gundam (based on an RX-78-1 Prototype Gundam) piloted by Takashi Kitamoto inside the dock. They fight and destroy it, then rendezvous with Shin Matsunaga outside the fortress. The three board a Dolos-class carrier (presumably the Dolowa).

Stage 4-1 in Dual Stars of Carnage. During the Battle of A Baoa Qu, the Dual Stars fight in A Baoa Qu's S Field. Johnny Ridden informs them that the mothership Dolos was being attacked by the Federation's new model mobile suits and asks them to go and assist. The new models are revealed to be Gundam G04 and G05.

Challenge of the Ball

Stage 4-2 in Dual Stars of Carnage.

The Dual Stars, along with the rest of the Zeon forces at A Baoa Qu, learn that Supreme Commander Gihren Zabi had "died honorably in battle" and that command has been transferred to Kycilia Zabi. Kurt loudly questions what is happening with Zeon. However, they are attacked by a large number of RB-79 Ball (including a RB-79K Ball Type K), which were taking cover in the wreckage of several Salamis-class cruisers.

Fierce Battle at A Baoa Qu

Stage 4-3 in Dual Stars of Carnage.

With the sinking of the Dolos, A Baoa Qu was all but lost. However, Johnny Ridden asks the Dual Stars not to give up. He tells them that a Gwazine-class carrying "the future of Zeon" is preparing to launch right now and asks them to go and defend it before flying into battle once more. They fight their way into A Baoa Qu, through a massive number of Federation mobile suits.

At the space dock of the Gwazine-class, the Dual Stars encounter the RX-78-2 Gundam piloted by Amuro Ray. The two engage in a fierce battle with the White Mobile Suit. Though the outcome of the battle is unclear, the Dual Stars survive, albeit with their mobile suits heavily damaged. They see the Gwazine they protected leaving A Baoa Qu with Char Aznable on board and fly off to join it.

Its Name is Alex 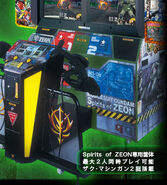 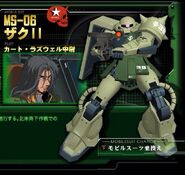 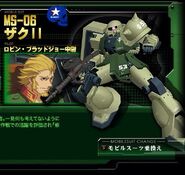 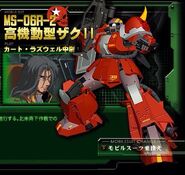 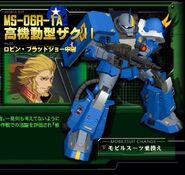 Model of the Pegasus-class 3rd ship, one of the bosses in the game