The story mode of the game follows two mobile suit teams: the SRT-Unit 1 of the Earth Federation and the Blaugher Team of the Principality of Zeon. As the leader of either team, the player takes on various missions all over the world, with branching paths depending on the player's performance. In some missions, the player may encounter famous characters, such as Amuro Ray and Ramba Ral.

As with other shooter games on the system (such as Red Steel), the Wii remote is used to aim/shoot, while the nunchuk's control stick is used to move around. The Z button is used to jump/dash while the C button is used to lock-on to the nearest enemy. The B button on the remote shoots the weapon on hand, and the minus button switches between weapons. The arrow keys enable sniper mode, allowing the player to target faraway enemies. Pressing the A button goes into melee mode, drawing your mobile suit's melee weapon. Swinging the remote vertically and horizontally attacks, with a maximum combo of three hits.

It is possible to target and destroy the head, arms, and legs of enemy mobile suits. Destroying the arms removes the ability to use certain weapons, while destroying the legs reduces mobility. Destroying a mobile suit's head in sniper mode results in an instant-kill. The player mobile suit's parts cannot be destroyed, though the AI teammates are still susceptible.

All weapons have a limited amount of ammunition, with ballistic weapons having more and beam weapons and bazooka type weapons having less. All mobile suits have one or more sub-weapons in addition to the primary weapon, such as Vulcan guns, grenades, and missiles. Primary and sub-weapons can be refilled at supply points located on the map. Health can also be refilled at supply points, though doing so results in a score penalty. The weapons of enemy mobile suits can be picked up and used once they are destroyed. However, mobile suits with built-in weapons cannot pick up weapons, forcing them to rely on supply points. Zeon mobile suits other than Gelgoog-type cannot use beam weapons.

Along with the shooter element, you also fight alongside up to two AI-controlled allies. Pressing the "1" button switches between squad formations. Formations are unlocked as the game progresses, and some of them confer a bonus to either offense or defense.

Each faction has its own models, or types, of Mobile Suit. Each has its own specialty and purpose. The two warring forces described in-game are the E.F.F (Earth Federation Forces) and The Principality of Zeon. Many Mobile Suits that make an appearance in this game are from the very first Gundam series. During gameplay, it is possible to customize mobile suits ranging from color to weapons.

After beating the campaign for either faction once, the ability to capture enemy mobile suits is unlocked for that faction. By destroying an enemy mobile suit's head in sniper mode, that mobile suit is made available for future missions. 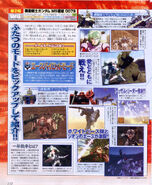 Retrieved from "https://gundam.fandom.com/wiki/Mobile_Suit_Gundam:_MS_Sensen_0079?oldid=456249"
Community content is available under CC-BY-SA unless otherwise noted.