The Gundam Wiki
Register
Don't have an account?
Sign In
Advertisement
in: Universal Century, Series, Stubs,
and 2 more

2
Mobile Suit Gundam MS Generation is a manga with two volumes about the One Year War, published between 1989 and 1990 in magazine Dengeki Comics written and illustrated by Rei Nakahara.

Thomas P · Ims through the eyes of a newspaper photographer, G in a variety of federal and One Year War battlefield - is one of four planned "RX-78E Gundam GT-FOUR" depicts the two aspects. Setting of the photographer, GT's bottom line - because not enough is linked to hazard and talk FORE, as the story feels incomplete, GT-Rated actually more one-shot story that tangle FOUR.

Aces of the Air Force. Aka Jim. GT-FOUR will follow a checkered life from participating in the project. But as an excellent pilot, and therefore often fail to impossible flip on who is frivolous.

Similarly, the ace of the Air Force. Aka Charlie. Jim and synchronization. Unlike common-sense person of the world in the gym. After encountering a nasty thing to worry about his bald-headed father. He also will follow the GT-FOUR checkered life from participating in the project.

Charlie's childhood friend. People will go to arm problems in the brig for the good of violence. 喰Ratsu that corporal punishment was demoted because of the past.

GT-FOUR women officers have joined the project. Excellent as a pilot.

Zeon ace. Zaku speed test pilot, shot down as the one that scores at least five vehicles MS4 machine. Gundam GT and hopes to play in a final test of the airframe-attack to FOUR. Have dominated the GT from beginning to end-FOUR, by exploiting the gaps in the core fighter shot down ride of the cape.

Was once known as mountain climbers the world of genius. Before the Immigration and space force in the past half-K2 failed to press ahead with a friend Mallory and climbing. Then, when the descent into K2 as Zeon soldiers, and escaped through the square with a Zaku machine to press ahead with the climb K2 ....

The mobile army officers charged 12 members of Youth Force. In very hot-blooded, Meta諫殴Ri飛Bashita Warren. Warren, the fight to board a browser with Buro Twining, defeated. Twining helped with our lives.

The mobile army officers charged 12 members of Youth Force. Cooper is more calm. Warren, also afflict the federal troops on board a browser with Buro Cooper and eventually defeat. We can help with life by Warren Cooper.

Elderly technology officer. Perhaps the company officer or field officer. Cooper, with the sortie in Burau・Buro Twining, the defeat of Soviet forces that oppress. Missed the two young people in exchange for his life. Bereaved in the war years and one son, had seen the remnants of his son Cooper.

Side of the six was a newspaper photographer at the company Jionikku MS (Zaku old) and will be forced to learn and discover from Zion, photographer and federal troops still serving. The young man's courage in daring rival the military but civilians, there were only raised in frightened the locust colony. 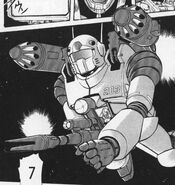