The Gameplay follows in the vein of Journey to Jaburo, but is significantly improved from the awkward controls of its predecessor by the simple fact that it allows a form of control using the left analogue stick. The game features an intro atypical to Gundam games and especially to the context of the story. Rather than being a dramatic battle or a recounting of historical events from the Universal Century, it is more of a homage to Gundam fandom. It features stylized color and silhouettes of mobile suits, schematics and Gunpla in its individual parts in plastic framework set to a mellow J-Pop style musical theme.

Lost War Chronicles was adapted into a two volume manga series, published by Kodakawa Shoten in Japan and Tokyopop in America. This was the only US release of this saga. Fortunately the two volumes were indeed both released in the United States. 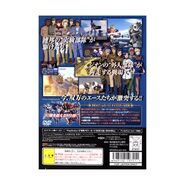