Mobile Suit Gundam: Journey to Jaburo is an action game based directly on the Mobile Suit Gundam films and series. The game begins at the start of the series and ends at the ending of the second film. The game plays in an action game format with a standard third-person view. It features newly hand animated cutscenes that depict events from the original television series as well as a CGI opening depicting a space battle from the One Year War and then a scene of the Gundam destroying several Zaku IIs before being attacked by Char Aznable.

The English dub of the video game features the voices of the actors who were cast for the Mobile Suit Gundam television series as with most games subsequent to the series dubbing, rather than the English cast of the films.

The story mode of Mobile Suit Gundam: Journey to Jaburo follows the events of the series while adhering to the films official. It contains scenes and events that were cut from the films, but it follows the film official due to facts like Sayla Mass obtaining a Core Booster, rather than G-Fighter and the retirement of the Guntank in favor of having a second Guncannon.

The game begins with the Zaku infiltration of Side 7, it shows this as well as Amuro finding the Gundam. In the first level he fights three Zaku IIs, only two of which need to be destroyed. An cutscene depicting briefly the events from Side 7 all the way to the White Base's arrival on Earth follows then players are thrust into a battle against the forces of Garma Zabi. The story mode continues in like fashion on the Earth segment of the series, avoiding aquatic combat and depicting mainly the more important battles of the series. Cutscenes tend to be lengthy summaries of the events of the series and have crisp animation, though they follow the animation style of the original series.

The nine missions included in Story Mode are nearly all named after episodes of the series and naturally involve in them the events of said episodes. The two exceptions to this rule are Cross of Sand, which takes place during episode 18 of the original series "Zeon's Secret Mine". The missions are as follows:

After beating the story mode, players are allowed access to Tactics Battle Mode, in addition the normal CGI video is replaced by a stylized anime cutscene set to "Tobe Gundam!", the original opening theme of the animated series. The cutscene depicts the RX-78-2 Gundam along with the RX-79BD-1 Blue Destiny Unit 1, RX-78NT-1 Gundam "Alex" and RX-79(G) Gundam Ground Type; together with their respective pilots: Amuro Ray, Christina MacKenzie, Shiro Amada, Yuu Kajima and Pierce Rayer on a hill with their MS in front of the White Base.

Tactics Battle mode is an optional mode available once story mode has been completed. In this mode you play either a Federation or Zeon pilot whom remains nameless and faceless. You begin at a low rank and with only one mission available to each side. As you successfully complete the missions available with the MS available your rank increases and more missions and MS are unlocked. Five Missions can be unlocked in total. The first three are standard attack or defense missions, they are available to both factions, though what your role is varies by faction. The last two are available only to the Federation. These are duels with the RX-79BD-1 Blue Destiny Unit 1, and RX-78NT-1 Gundam "Alex" being piloted by Christina Mackinze and Yuu Kajima respectively. Christina compliments you during battle, whereas Yuu remains silent while in his duel Maureen Kitamura spurs him onward with encouraging remarks.

After each mission is completed a verbal assessment is given either by Matilda Ajan, Kergerenko, or Char Aznable. After this there are brief cutscenes featuring either Matilda or Kergerenko complimenting the player on their performance. If the player fails a mission, but does not retry it they will reprimand the player. As certain circumstances are met cutscenes with Char, M'Quve and Bright Noa are unlocked. There are also cutscenes featuring Christina, Shiro Amada and a White Dingo pilot when each allows use of their Mobile Suit. If the player continues fighting and raises their rank to Colonel in either faction they receive a special reward video. On the Zeon route this is a video of the major members of the Principality of Zeon thanking the player for their service, on the Federation side it is video of the major female members of the Federation from MS Gundam, War in the Pocket, and Blue Destiny competing for attention as they enthusiastically thank the player. 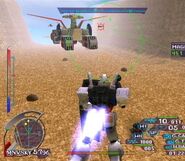